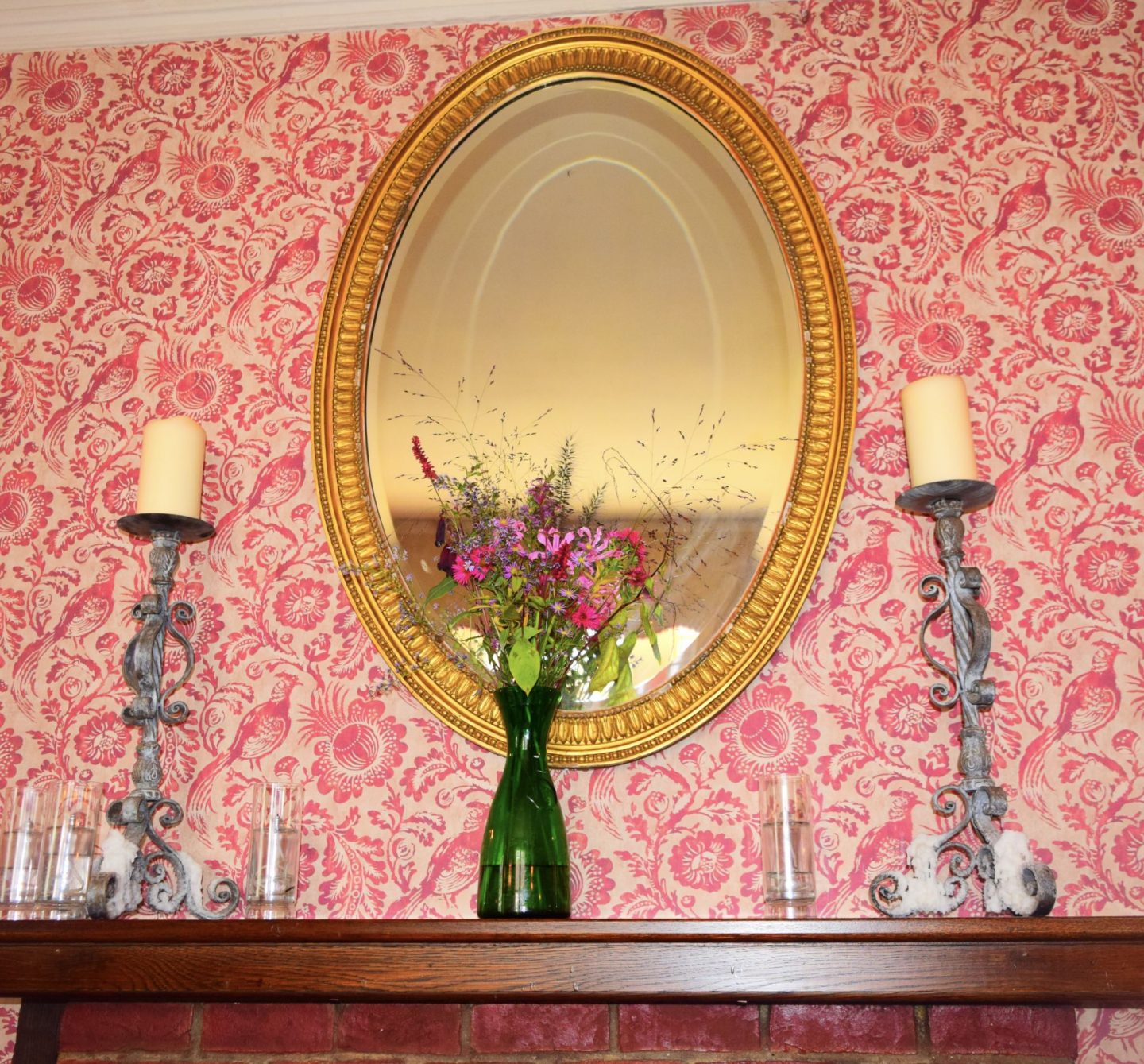 When we were on the road trip last month, one of the things I really wanted to do, was to enjoy a traditional Sunday Roast. It’s something I never really get round to in everyday life, and once we hit the Cotswolds, I became pretty much obsessed with everything terribly English. 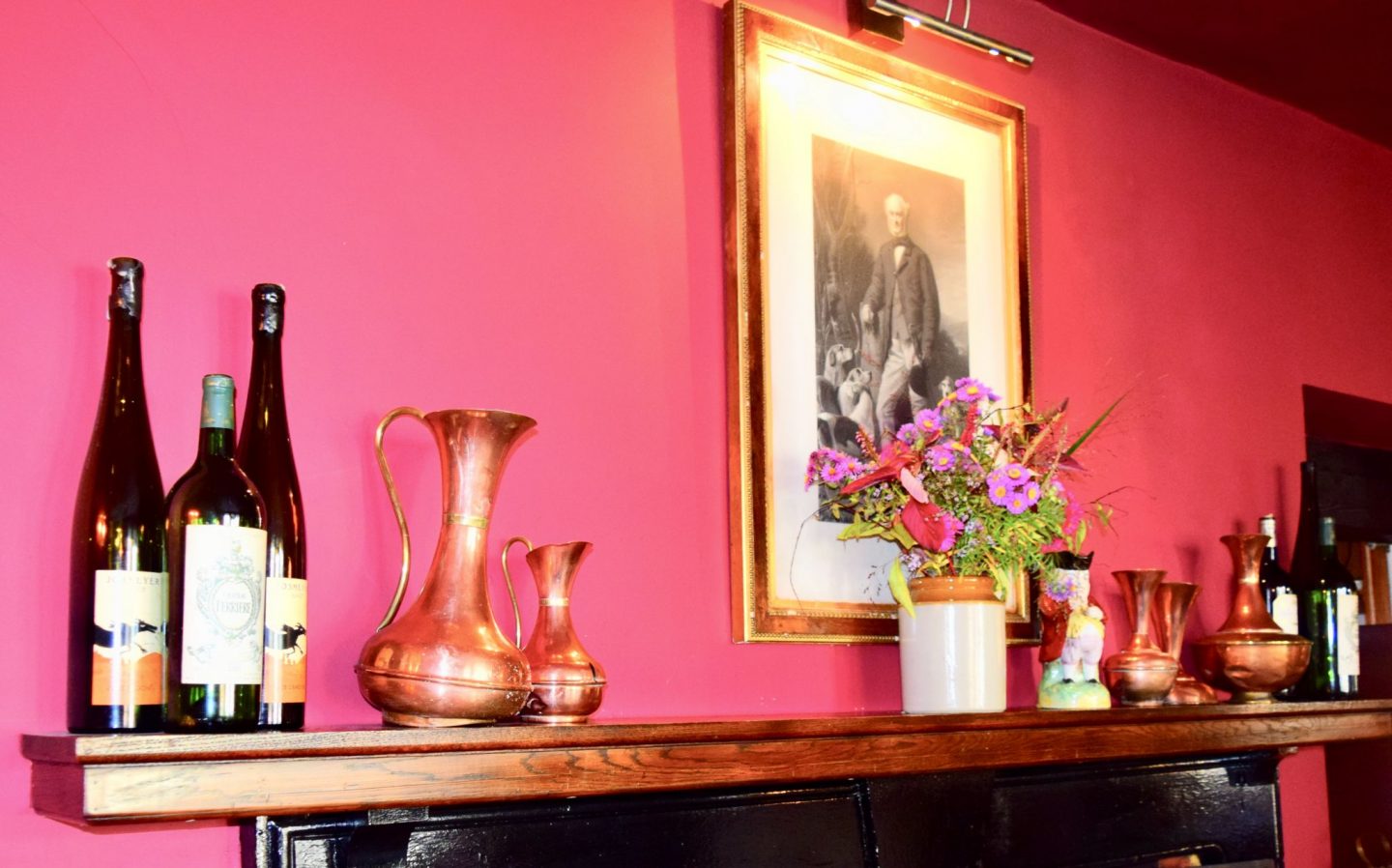 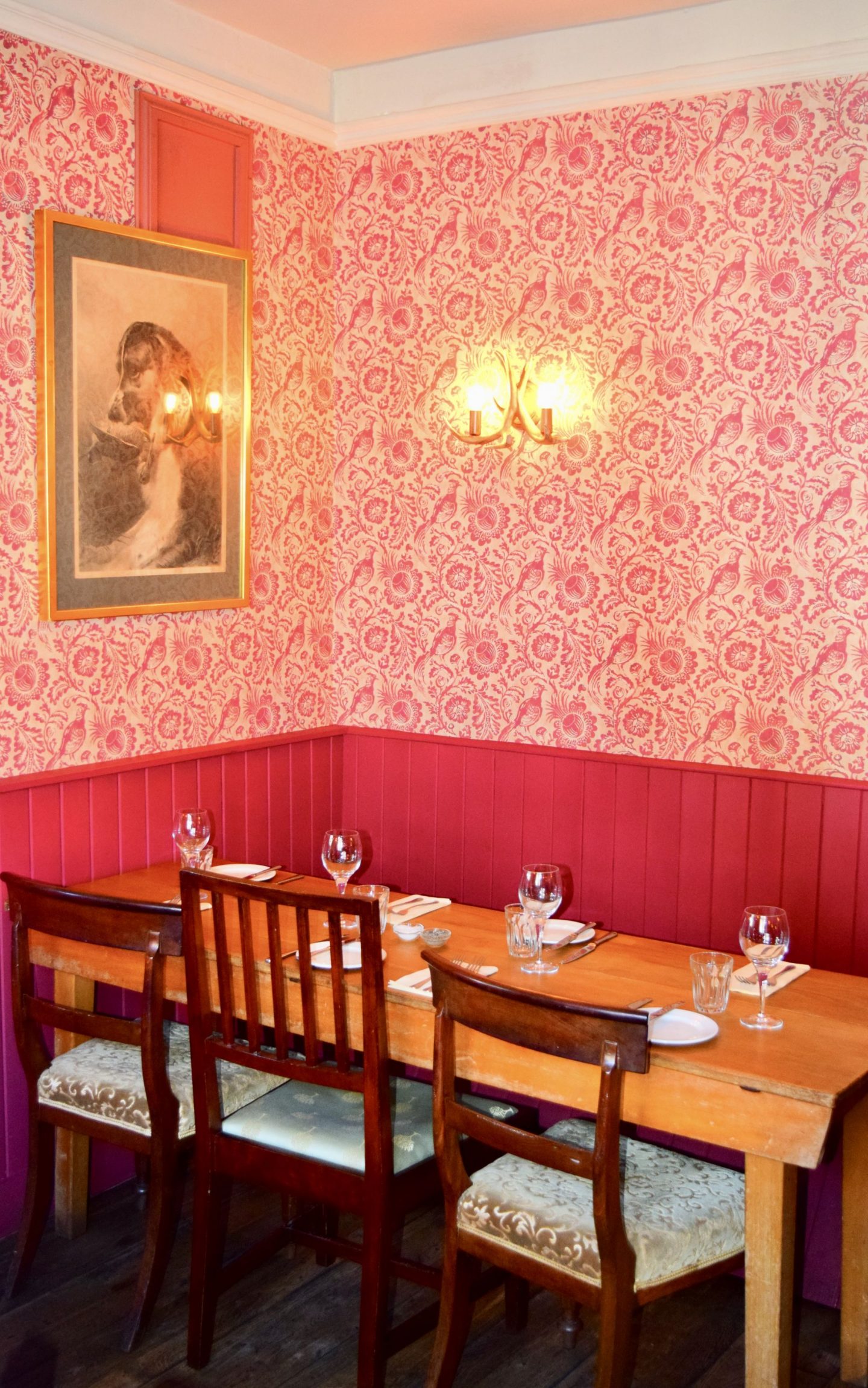 Happily we had been booked into The Fat Fox in Watlington. Not exactly in the Cotswolds proper, but somewhere between Oxford and London. It was an absolute joy to get to – driving through autumn foliage and exploring the countryside, we were absolutely famished by the time we got there. 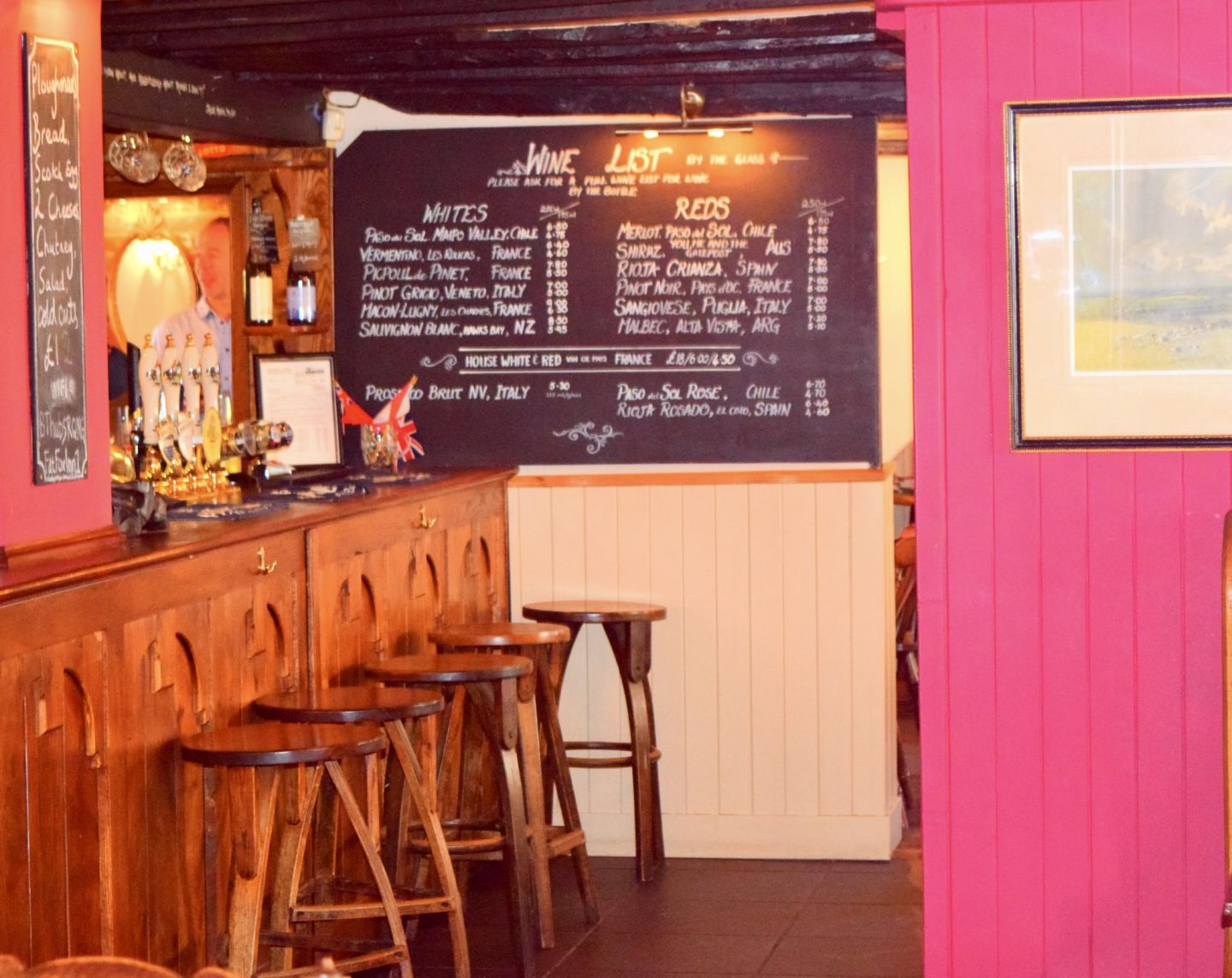 The inn is pretty much your perfect English pub – with nicknacks on the mantle, and mismatched chairs and tables, it’s the definition of cosy. Considering the temperatures were undergoing a bit of a drop, this was very much appreciated! 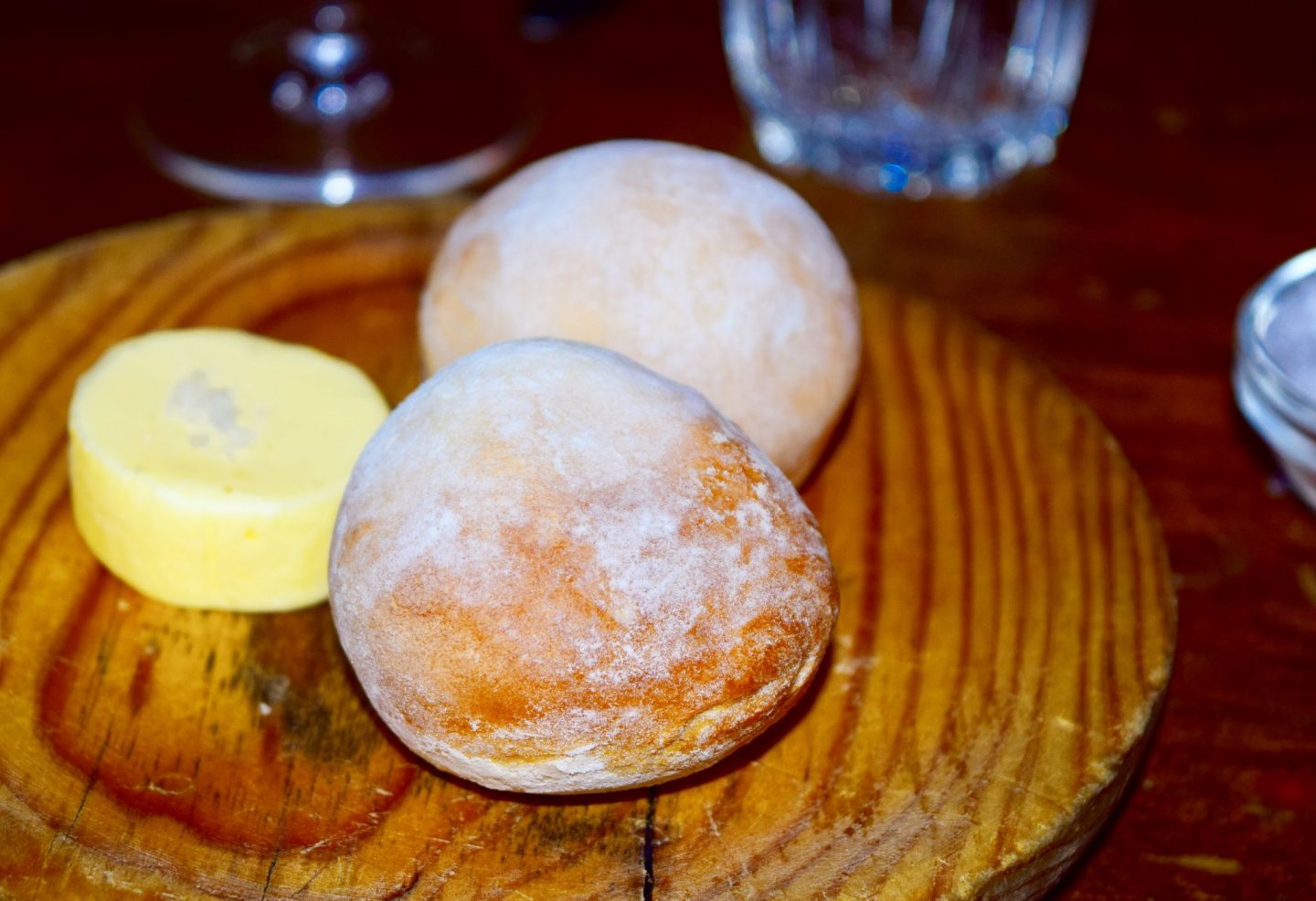 We were settled into the dining room, and handed the daily menu. It was a Sunday, so of course, there was only one choice we could make! Whilst we pondered our choices of starter, we were handed a board with two still warm from the oven dough balls, along with salted butter. There were a delight – crisp on the outside, fluffy on the inside, you can imagine how quickly these disappeared! 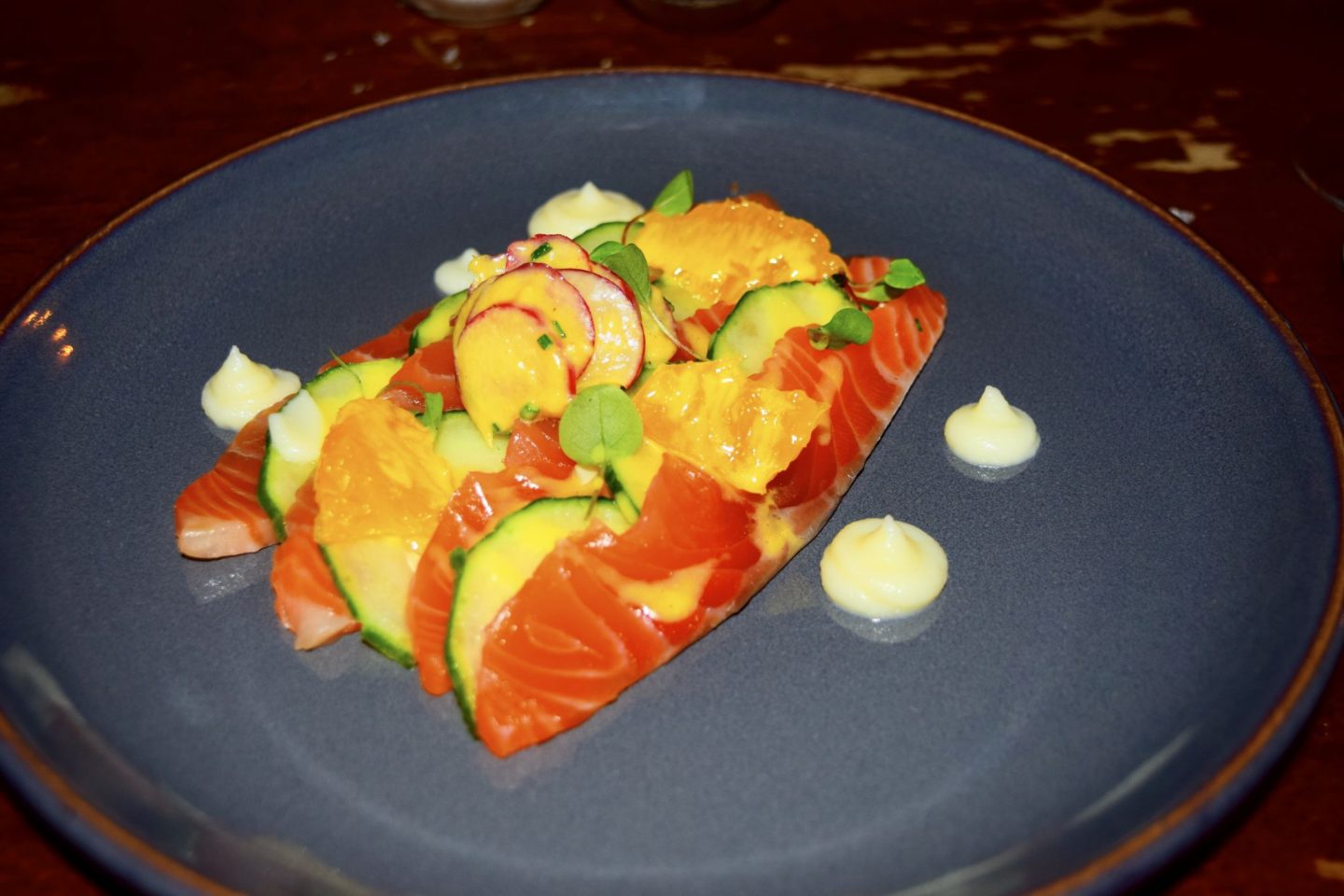 We started the meal with home-cured orange smoked salmon which was served alongside cucumber, radishes and homemade mayonnaise. Whenever I see salmon on a menu, I’m almost guaranteed to order it, and I’m so glad I did at The Fat Fox! 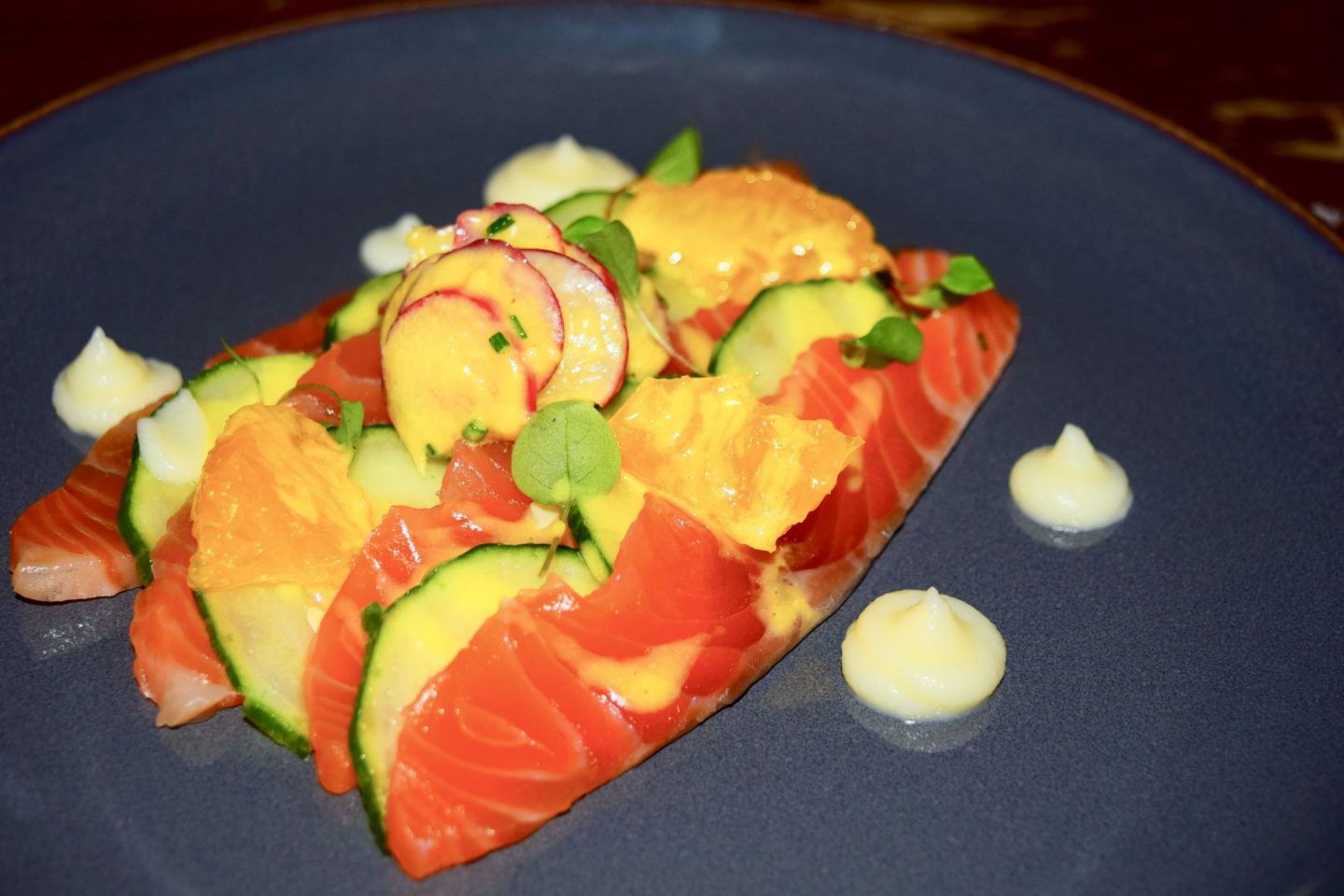 The fish itself was absolutely delicious – rich and seriously flavourful. The use of orange rather than the usual lemon as the citrus element was such a surprise and really made a classic dish feel new. There were also orange segments nestled in between the salmon slices which exploded with flavour. 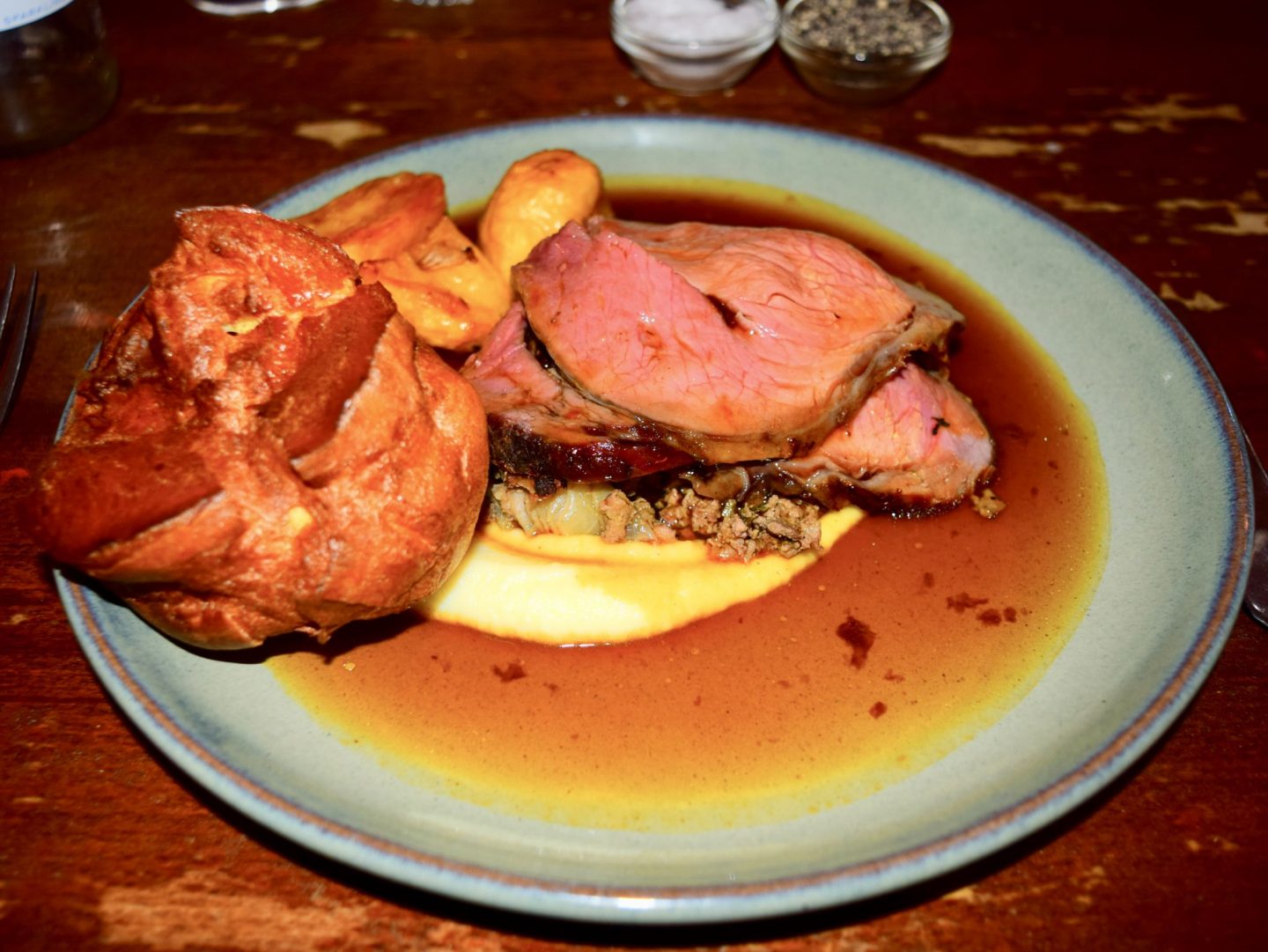 When the main course was served, I couldn’t hide my delight. It was an absolutely picture perfect roast beef dinner. Our plates came absolutely straining under all the goodies: there were slices of still pink roast beef, the silky smooth celeriac puree and rich liver stuffing which I think I could easily live off, not to mention a crispy puff of a Yorkshire pudding and wonderfully crunchy roast potatoes. 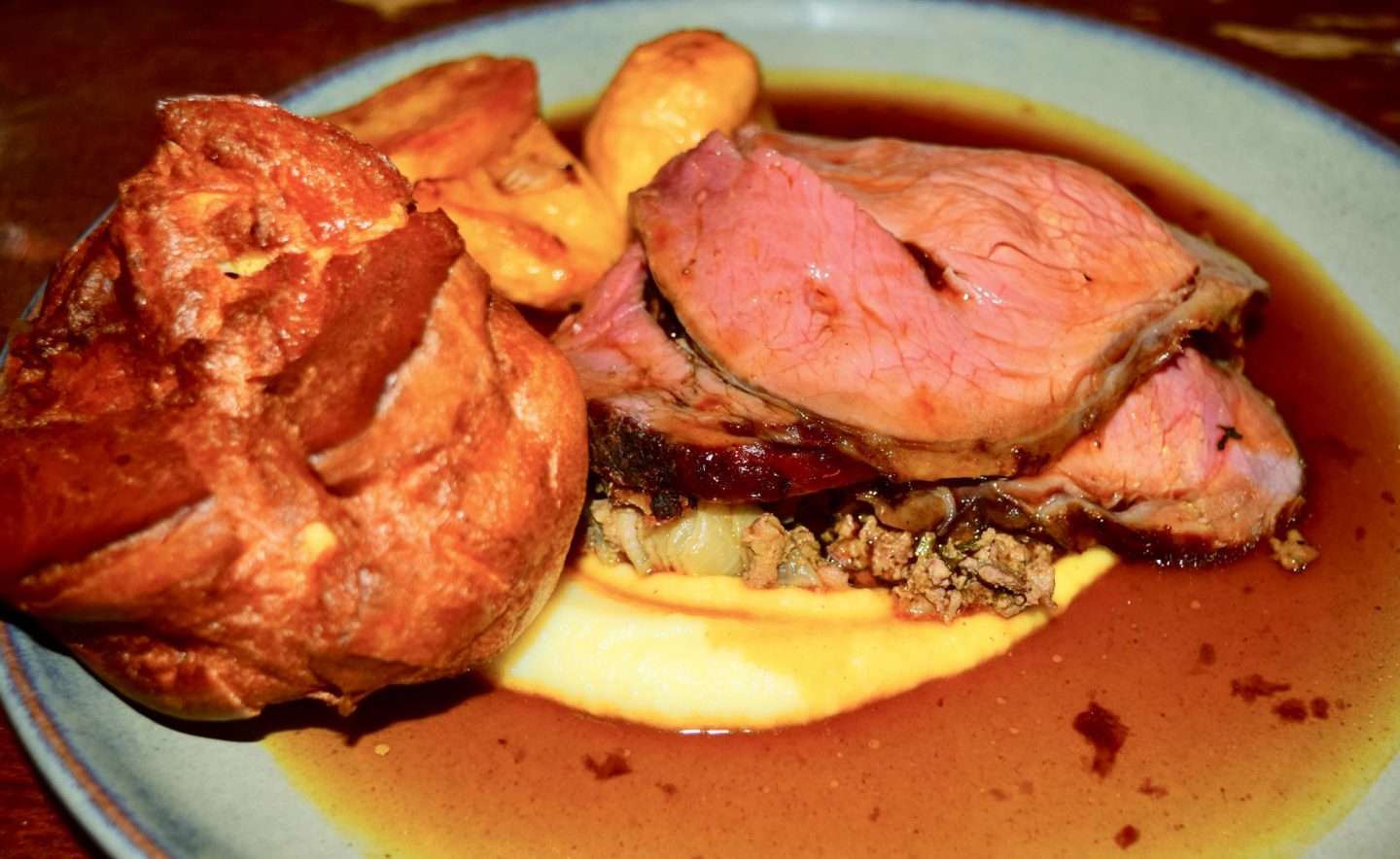 It was an absolute delight of a dish, and absolutely surpassed my ideas of what a traditional roast should be. The beef was perfection – the level was pink was ideal. It meant it was flavourful and melt in the mouth. It paired wonderfully with the stuffing, which was rich with the taste of chicken liver. I’m obsessed with celeriac normally, so the mash which was velvety in texture was my idea of heaven! 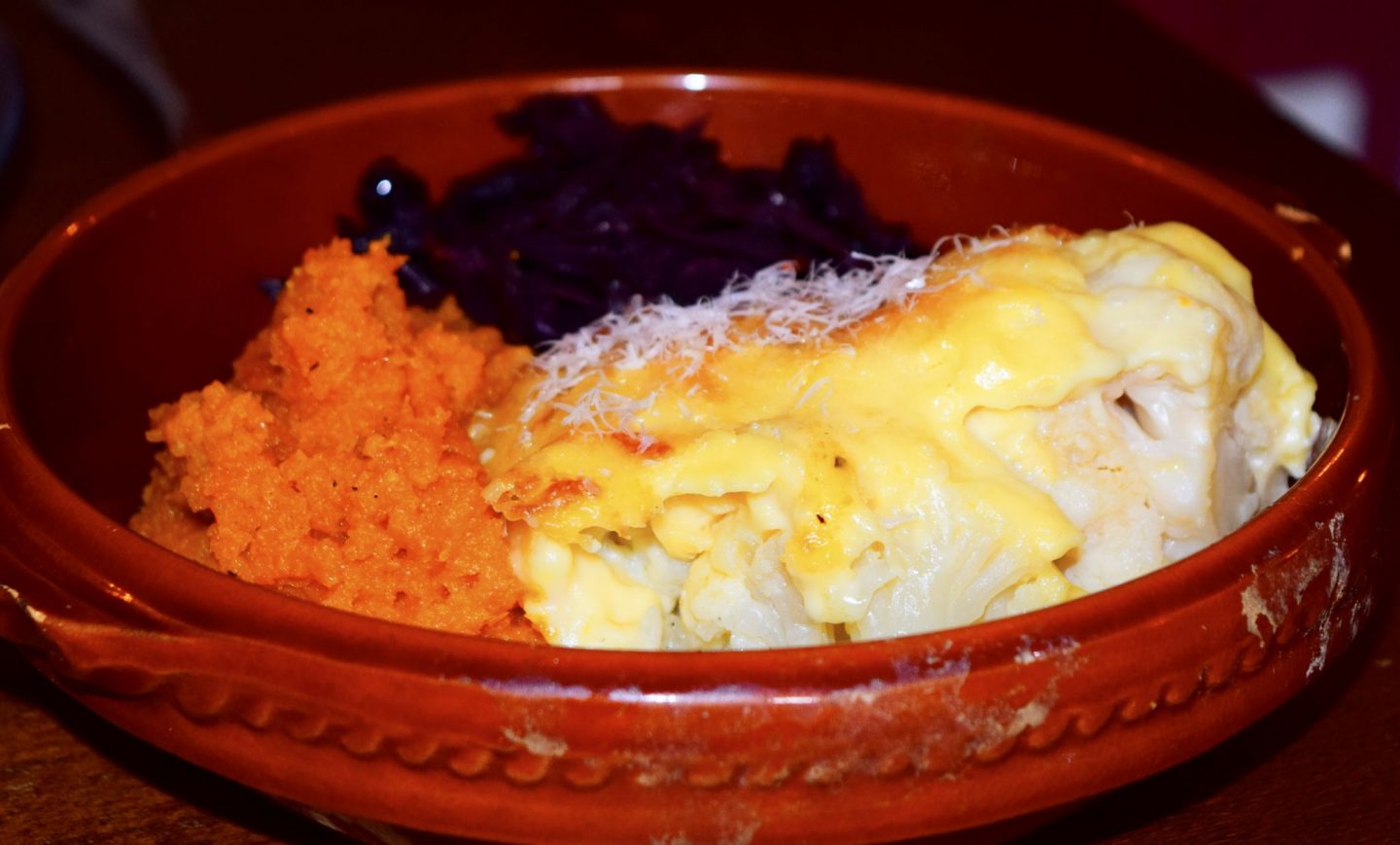 As if the plates weren’t enough goodness, we were then brought a bowl with even more delicacies piled inside. The richest cauliflower cheese, crunchy red cabbage and buttery mashed turnip were all tucked inside, and it was the most delicious surprise! Paired with homemade Horseradish, I savoured every mouthful. You couldn’t imagine a better, more satisfying lunch. 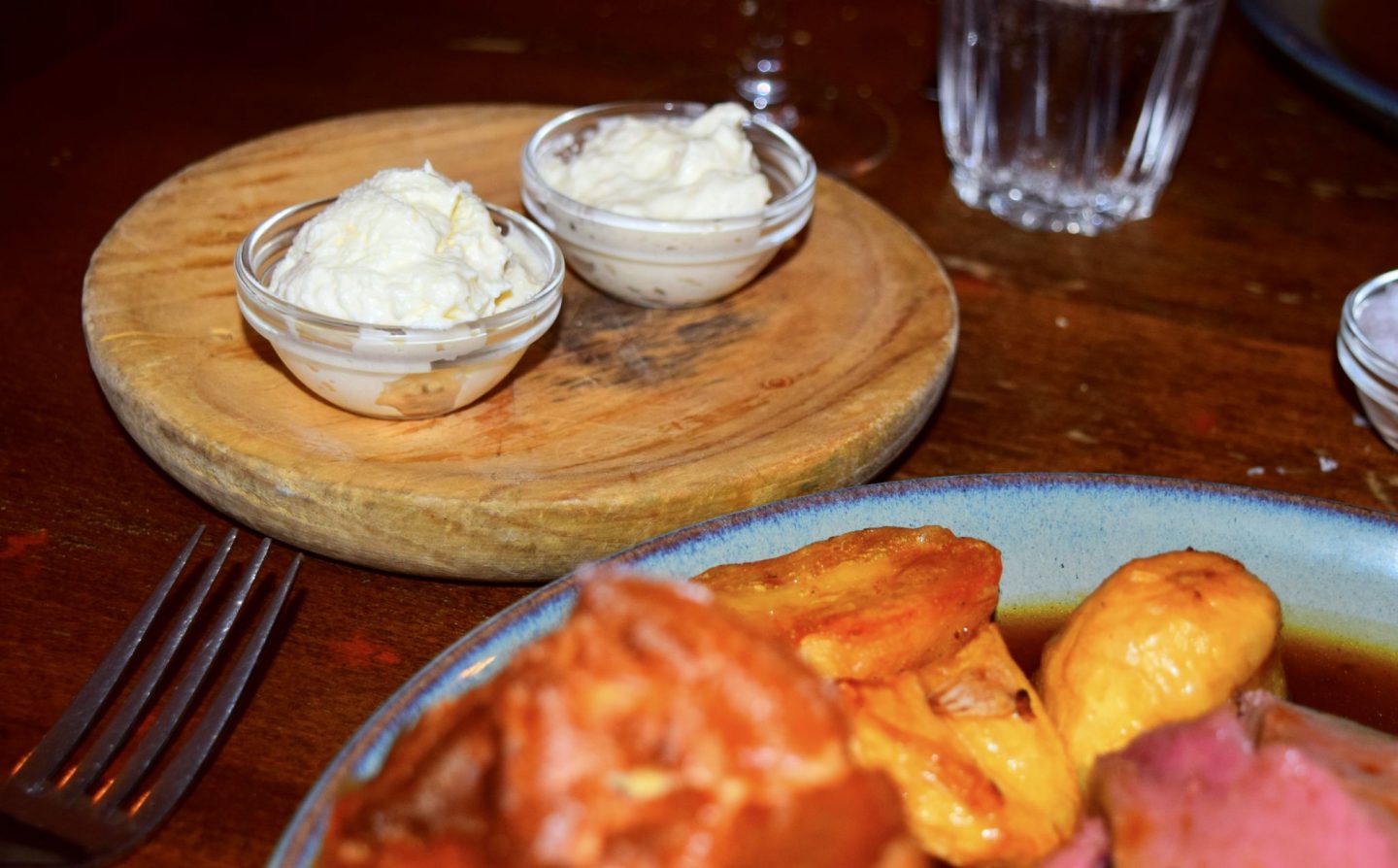 Every element of the lunch was perfectly balanced, and we positively rolled out back into the Oxford sunshine. I’ve been dreaming of the lunch ever since we left, and honestly, it’s worth the drive back down just to indulge again!

The Fat Fox Inn is in Watlington, Oxford and more info can be found here.