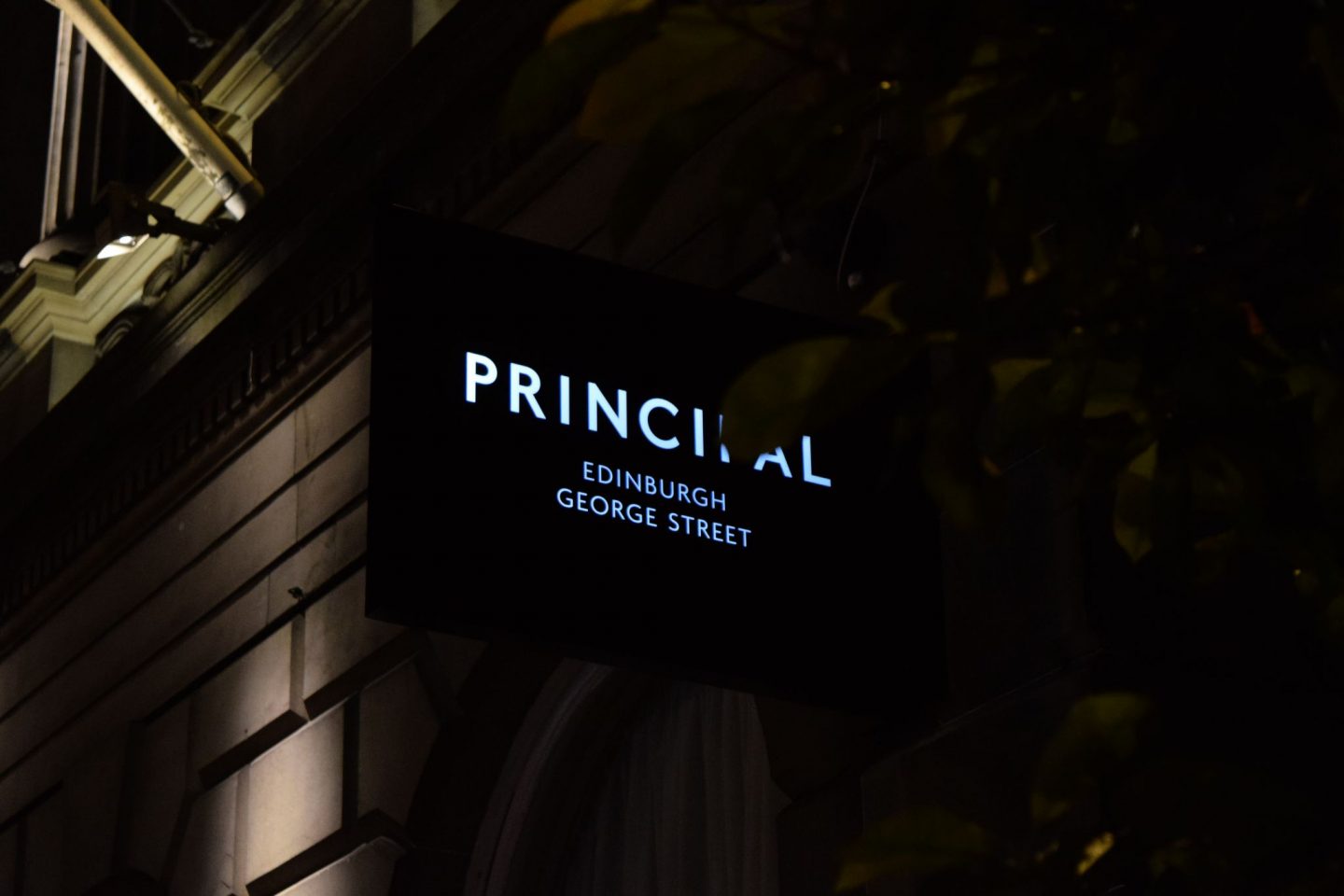 If you’ve been on George Street recently, you might have noticed a bit of a renovation going on over the past few years, as the George Hotel has been transformed into The Principal Edinburgh. 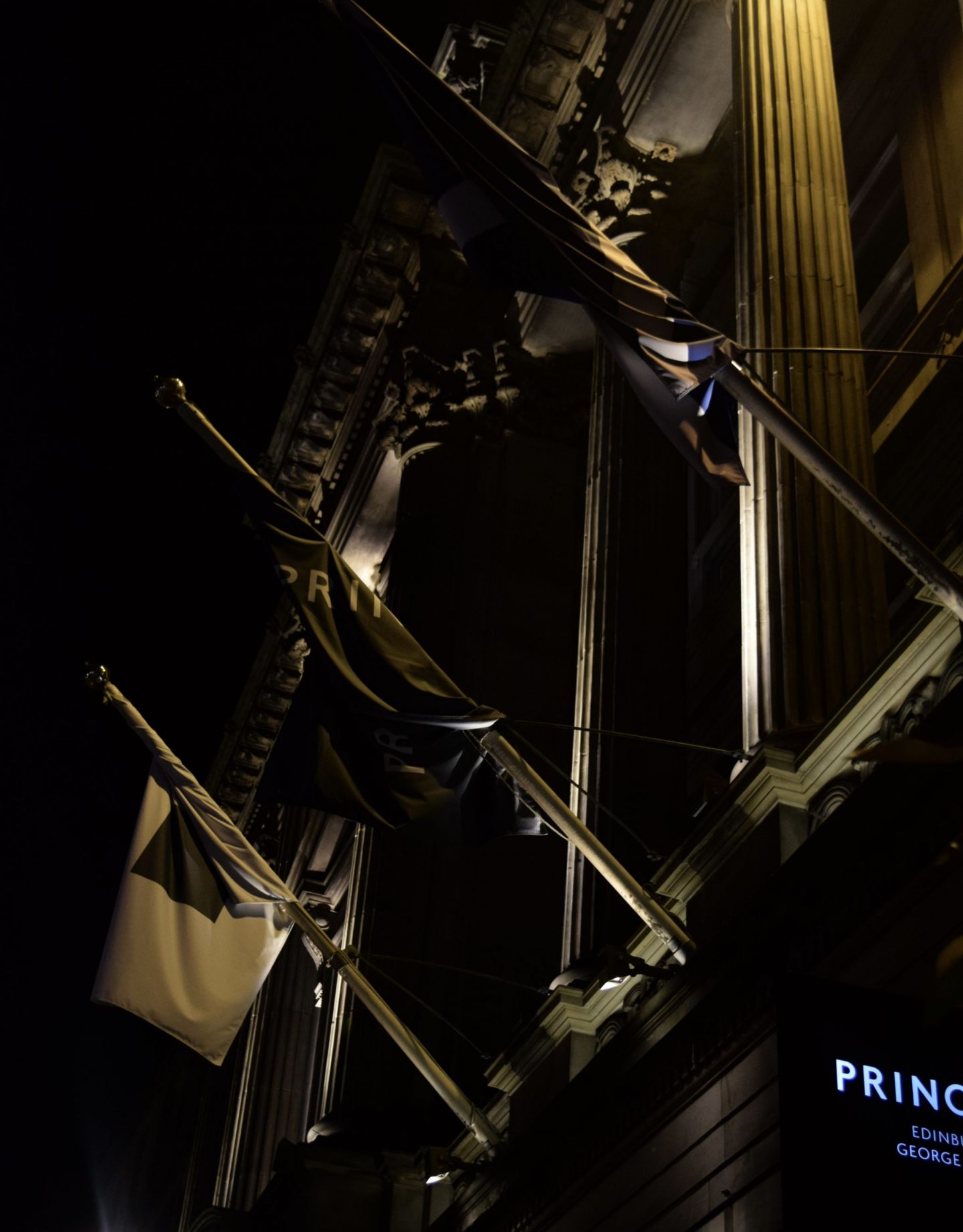 The building is one of the city’s grandest, and the hotel spans what was once a bank, three Georgian townhouses, as well as a more modern addition to the rear. It’s an absolutely glorious building, and by far the best hotel in Edinburgh. There is even a coffee shop (Burr & Co) and restaurant (The Printing Press) onsite, meaning that if you’re lucky enough to stay in the hotel, you don’t even need to step outside, whilst still enjoying some of Edinburgh’s best spots! 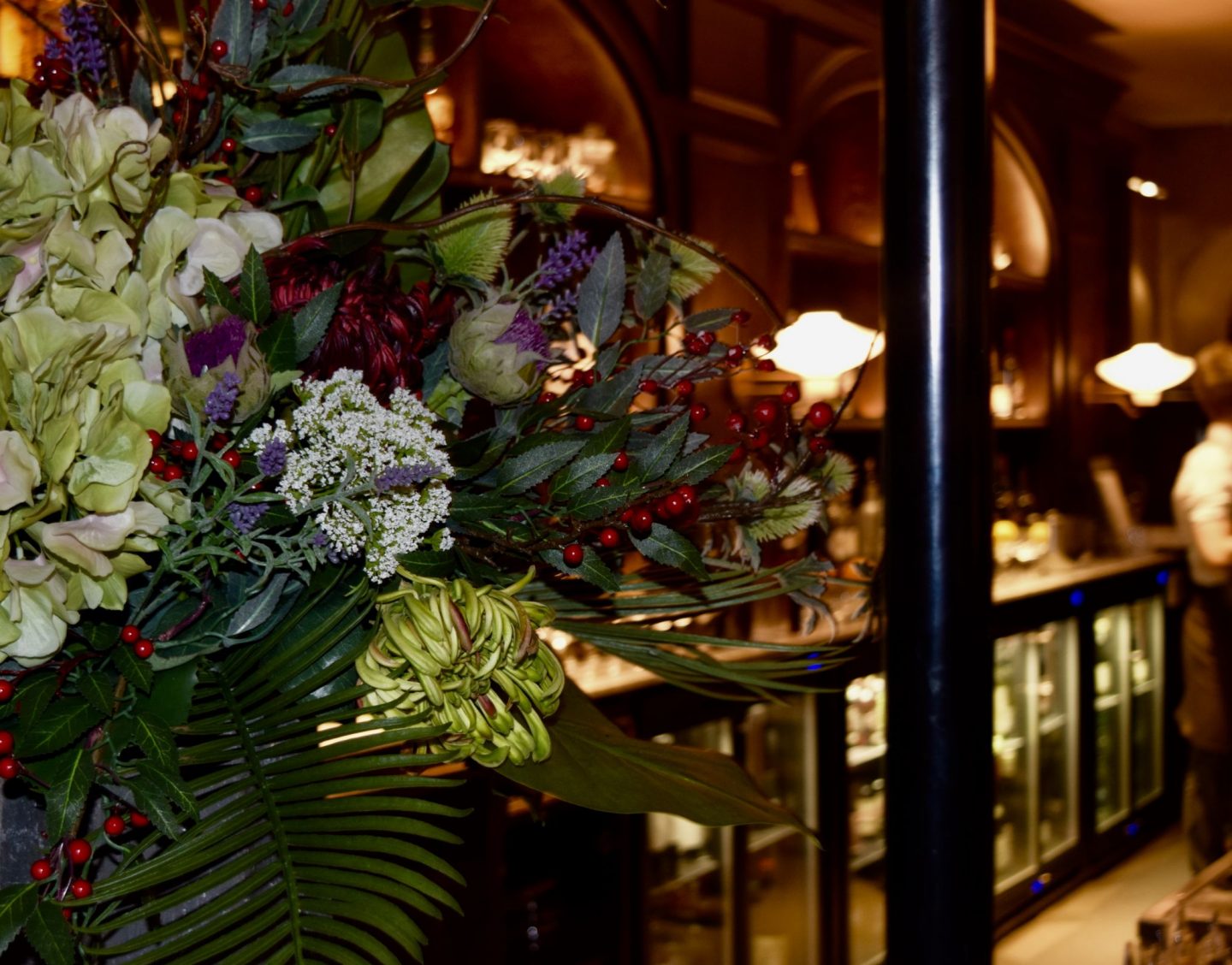 As well as getting to have something of a nose around the hotel, we had been invited for the official unveiling of a specially-commissioned artwork by British artist Charlie Anderson, to celebrate the hotel’s new look. We gathered in the bar of the Printing Press, sipping on signature vodka cocktails (Kelpies) or seriously strong Old Fashioneds whilst General Manager Andreas Maszczyk introduced Charlie and explained a little about the renovations. 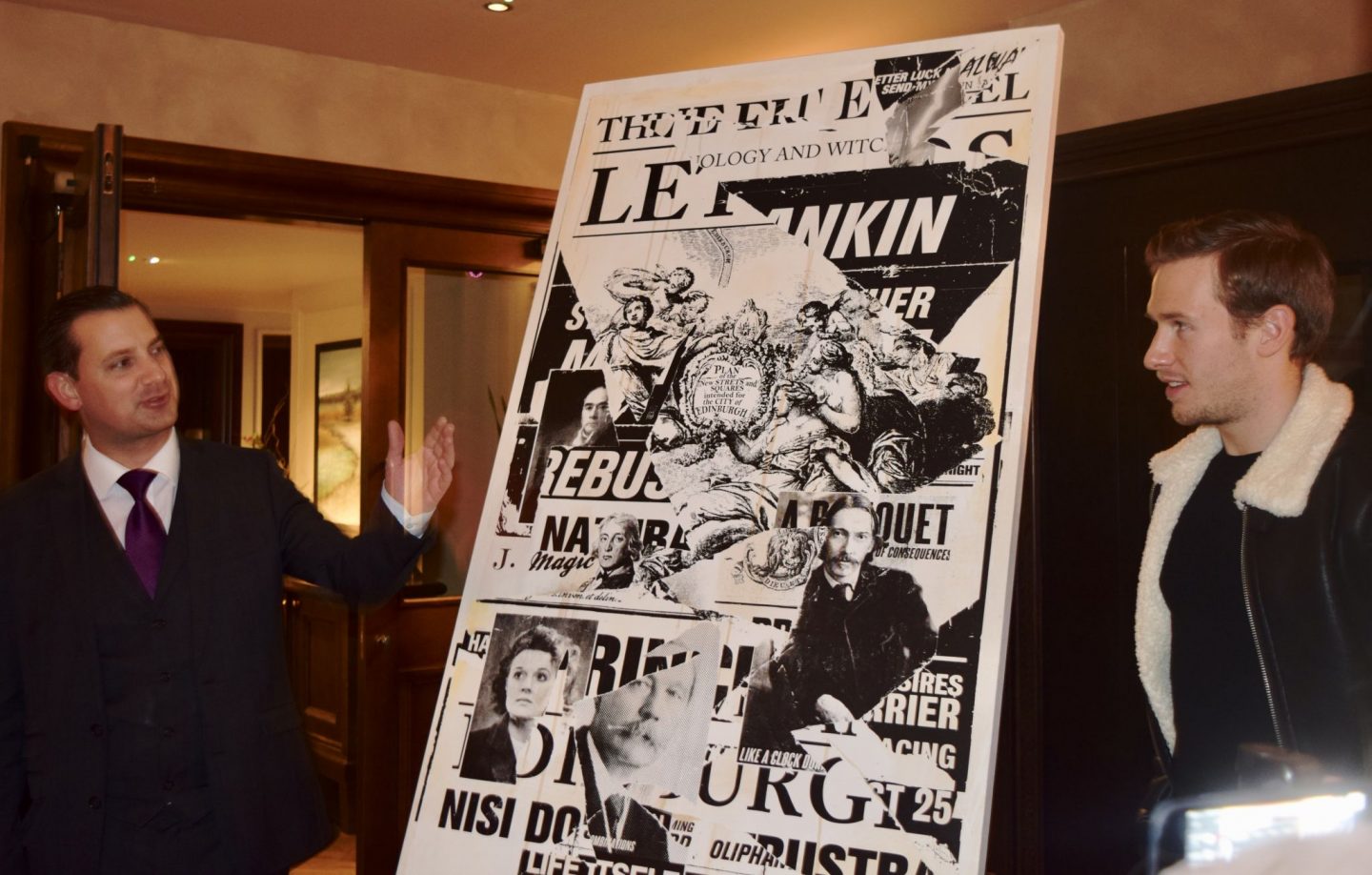 The artwork celebrates the best of Edinburgh – portraits of some of some of the city’s most prominent citizens are scattered throughout the piece, interspersed with a quotation from Sir Walter Scott. The top etching is taken from the original plan for the building (when it was still a bank) and it’s a really lovely representation of all that Edinburgh has to offer. We then heard from Charlie about the creation process and how he incorporated all of the elements of the piece together. 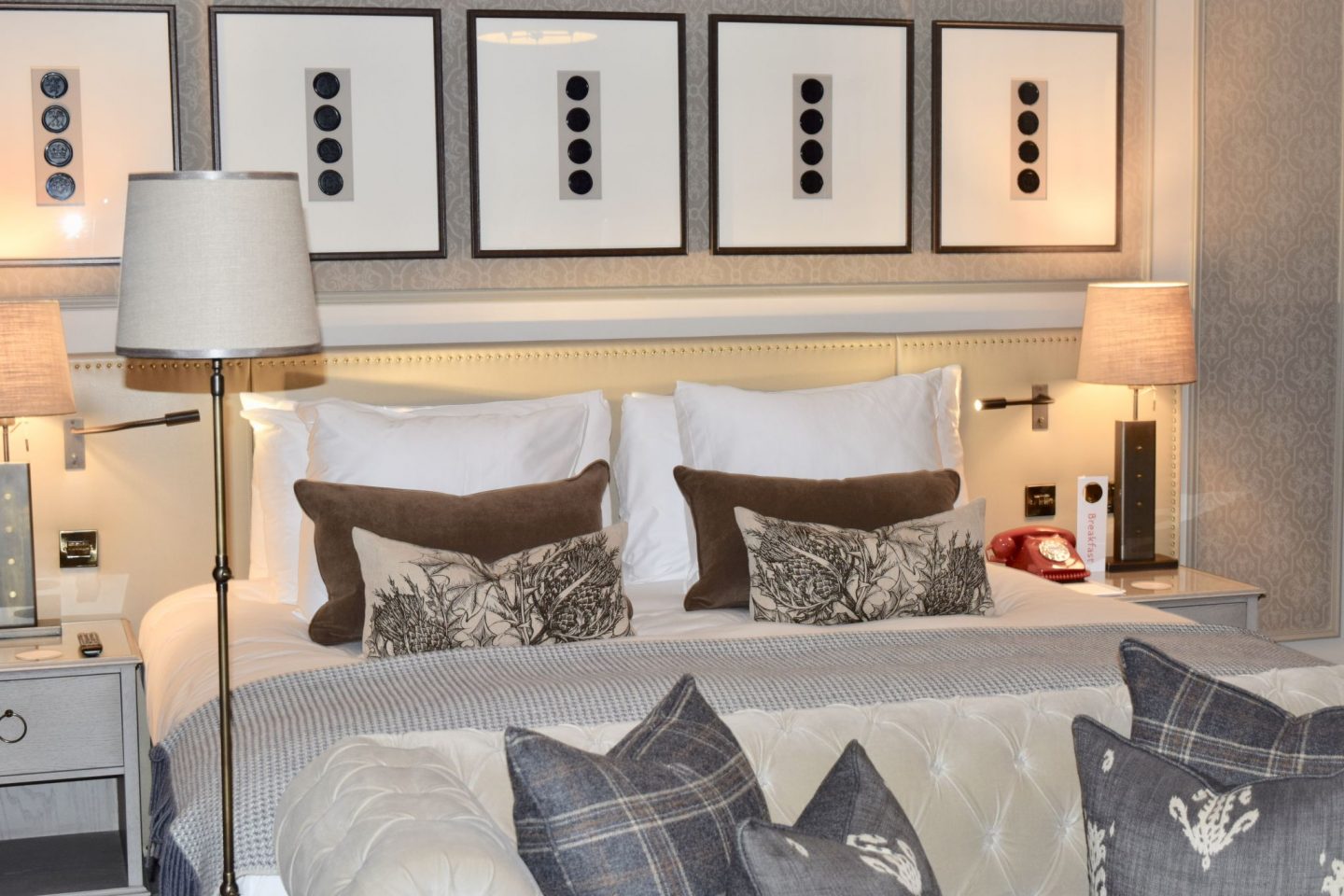 Then it was time to head upstairs to have a bit of a nosey at the rooms. We were shown to one of the hotel’s Junior Suites. Overlooking George Street, we could see the sparkling lights shimmering through the curtains, but it was absolutely silent. Then, sipping on prosecco, we got to have a real look around and hear more about the hotel in general. 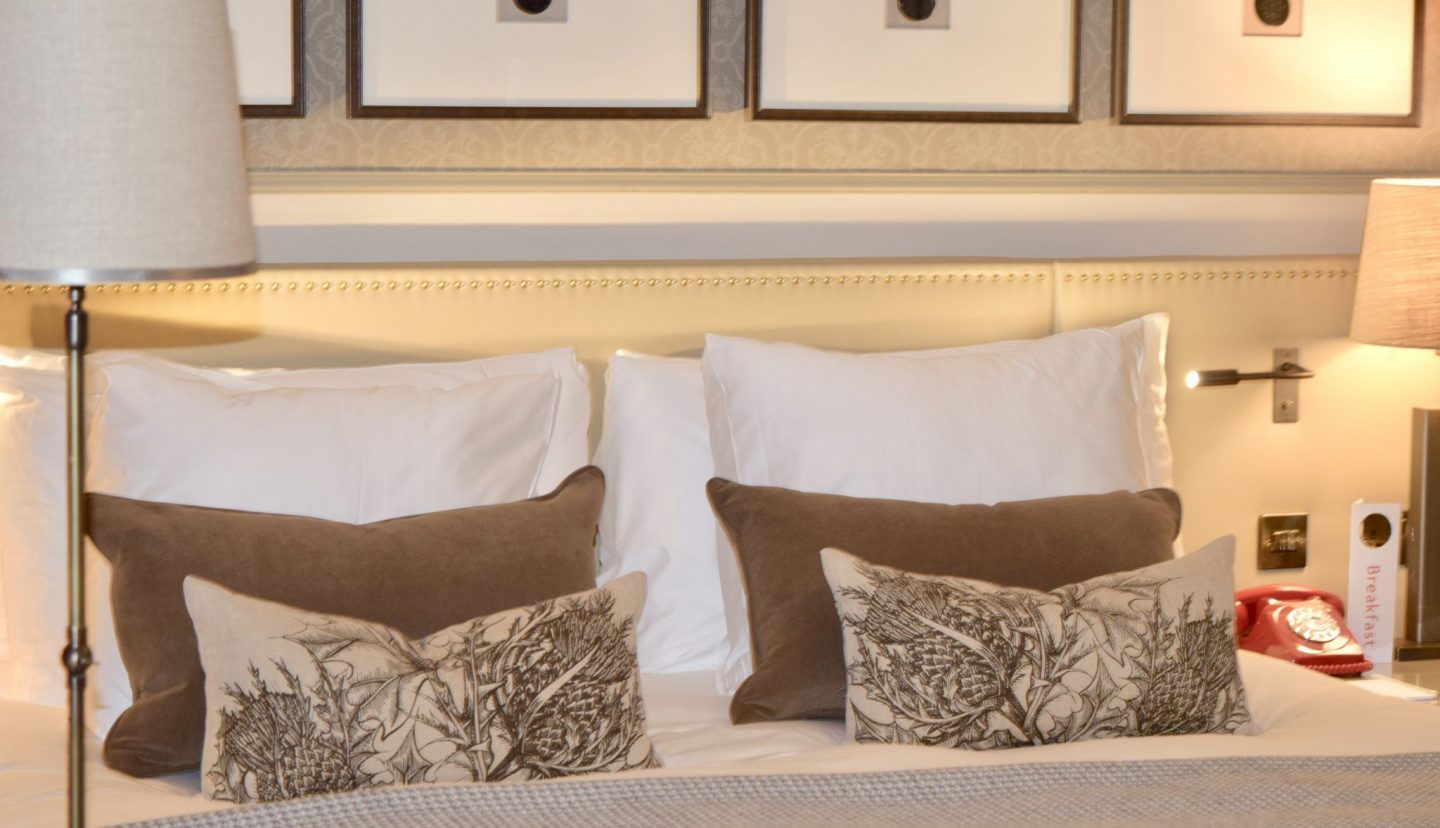 The room itself is absolute perfection. Decorated in soft greys and whites, it’s exactly how I want to redecorate. With a velvet chesterfield at the bottom of the bed, and soft flannel drapes, I can’t imagine a better place to wind down. 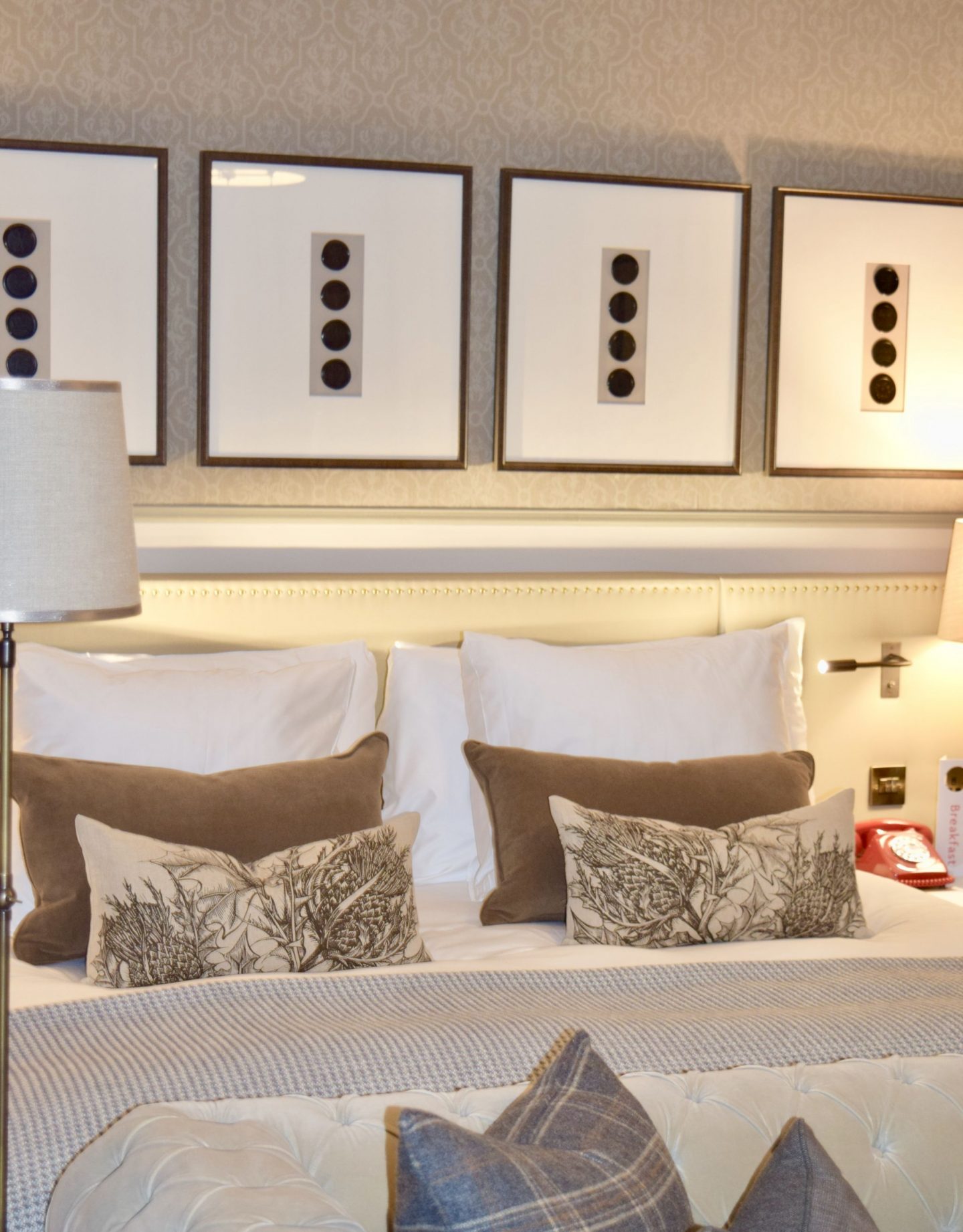 It was so lovely to hear Andreas talk about the hotel – the level of service and comfort that Principal Edinburgh prides itself on is seriously impressive. Every room has an old-school red phone which can pretty much grant every wish in under an hour. Whether you want to order room service or theatre tickets, it will be at your door in under 60 minutes! We were also shown all the extra little touches in the room – rather than an overpriced minibar there are complimentary tuck boxes, and the framed and wall-mounted televisions are all equipped with Netflix and the like, meaning you can sit back and enjoy a couple of episodes of your favourite shows. The hotel is now pet friendly too! Four legged guests are provided with their own beds and bowls, meaning they get as much of a treat as you do! 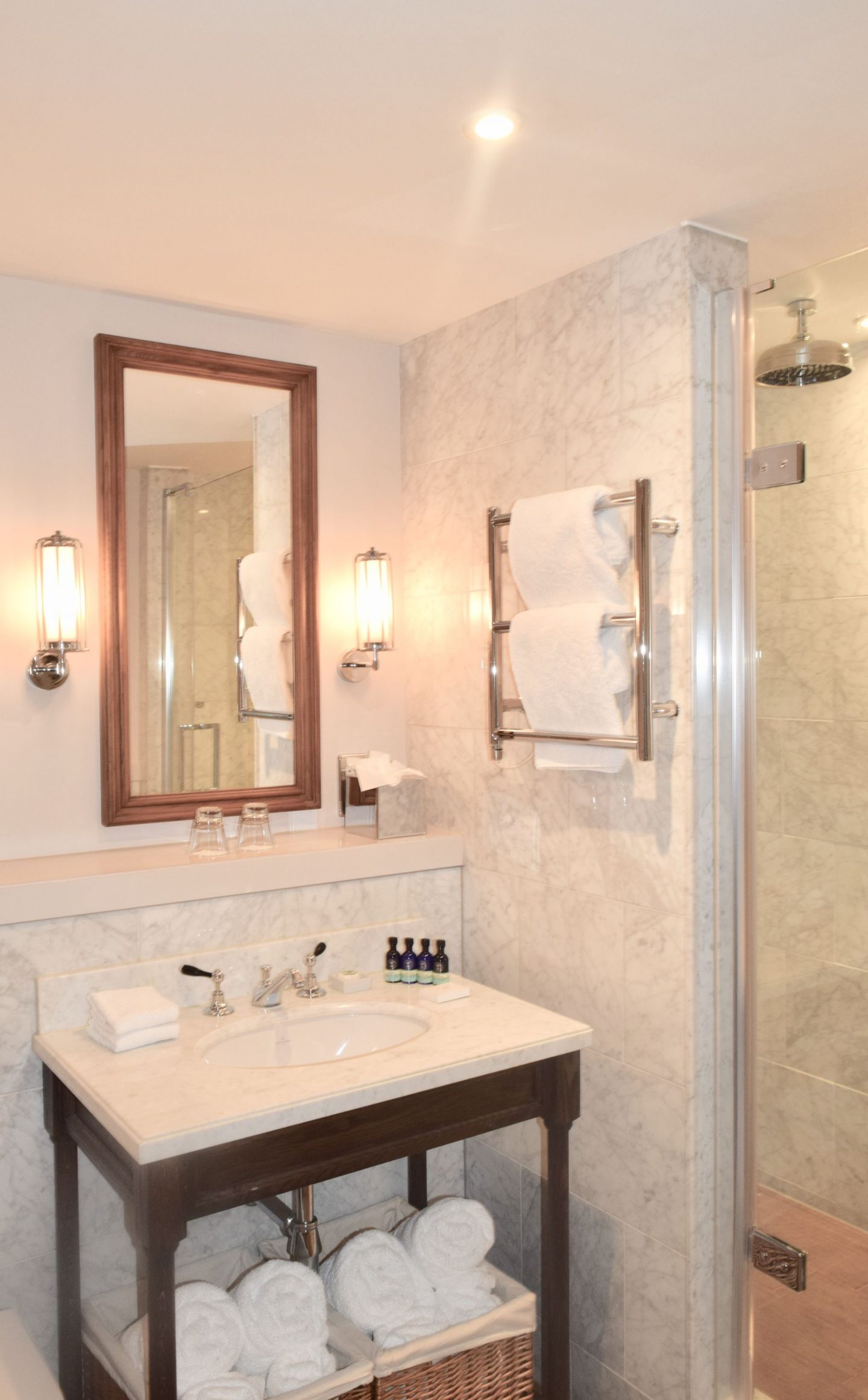 The bathrooms are just as dreamy as the bedrooms too! The suite’s was an absolute confection of white marble, fitted with a glorious roll top bath and rain-fall shower. Also, they are using one of the best water softener for water softening. All the rooms in the Principal Edinburgh hotel rooms come with these showers, which sound absolutely incredible! We then got the chance to explore the Forth View Suite, which has the most wonderful views over the skyline of Edinburgh. Getting to pop outside and see the castle all lit up was incredibly special. Unsurprisingly, it’s already booked up for New Years!

Rooms at the Principal Edinburgh start at £149 per night and you can find out more here.