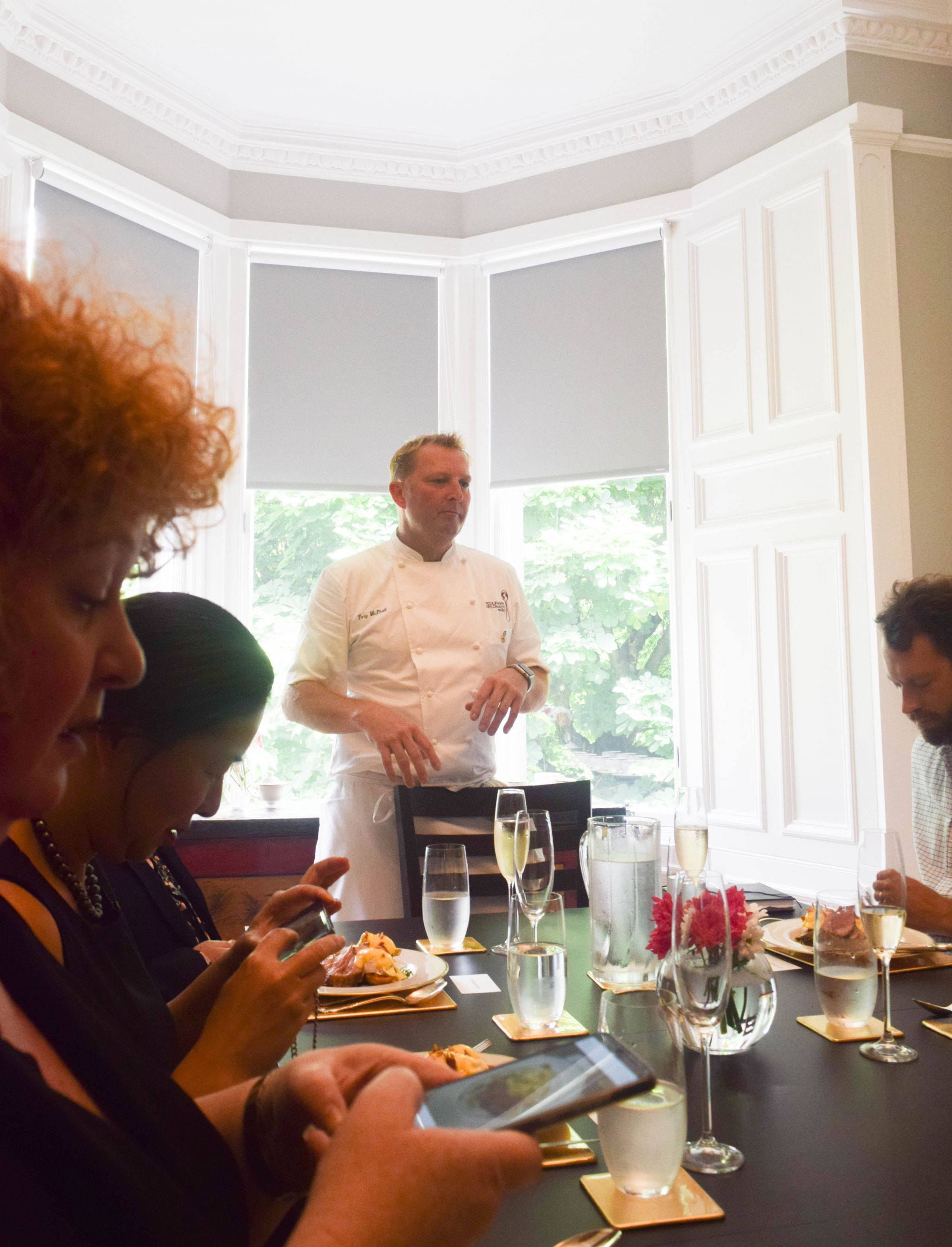 It’s not every day that an email from the US Consulate pops into your inbox. Even rarer is one inviting you to brunch. Not quite sure what to expect, I headed over to the stunning Principal Officer’s Residence in the heart of leafy Edinburgh for a taste of New Orleans in the heart of Scotland.

As part of the Taste of America initiative, top US chef, Tory McPhail had travelled to the UK to introduce us to a true taste of New Orleans. Executive Chef at the iconic Commander’s Palace, and winner of 2013 James Beard Award Best Chef South, I don’t think that we could have been in better hands for the afternoon! 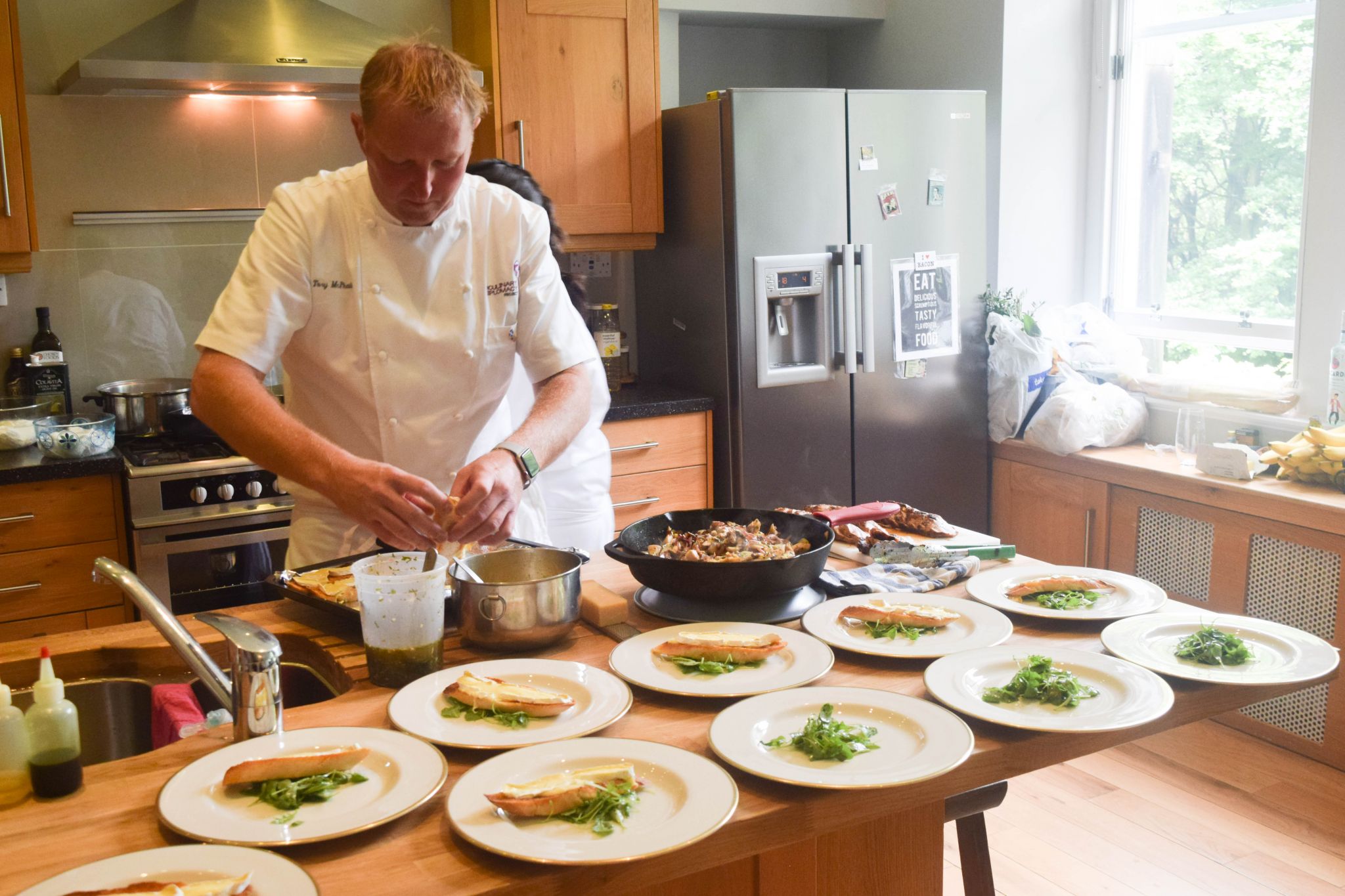 After kicking things off by getting to learn about the Consulate’s role in US-Scotland relations, as well as a taster of Southern cuisine, we were treated to some milk punch. Called an ‘eye-opener’ when you’re brunching in ‘Nola’ and made up of bourbon, half and half (single cream in the UK) a splash of milk and grating of nutmeg, it was a delicious start to the proceedings.

Soon it was time to tuck-in, so we headed through to the dining room to try some of Tory’s signature dishes. As with all great chefs, Tory is a real champion of what’s fresh, what’s local and what’s in season, so rather incredibly, The Commander’s Palace menu changes daily, with even the recipes being tweaked each time! We were treated to a seafood starter, with a trio of seafood – salmon, lobster and caviar. Served on a warm blini with a grated duck egg, it was incredible – fresh, surprisingly light, and full of flavour, it paired perfectly with our champagne! 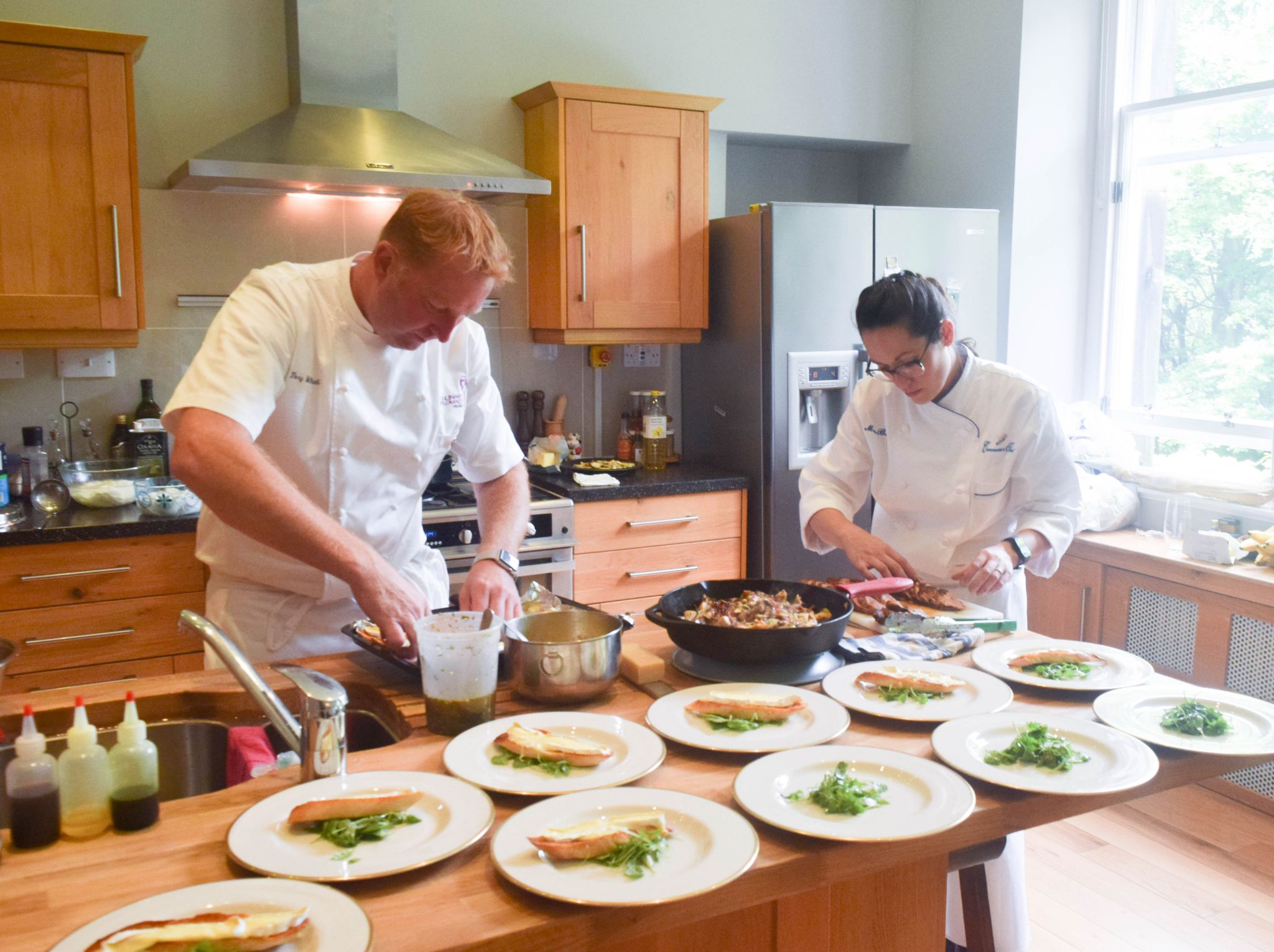 With a beautiful open kitchen, we were able to snoop on proceedings – wondering what was coming next. It was absolutely mesmerising to watch Tory and Executive Chef Meg Bickford at work as they whipped, plated and served up at record speed.

Our main course was the stuff of dreams – the most tender pork had been rubbed with Creole spice, which gave it the perfect amount of peppery heat, and it was served alongside toast, melted brie, poached eggs, hollandaise sauce, mushrooms and an absinthe vinaigrette. Indulgent doesn’t even begin to cover this dish – the rich hollandaise was the perfect foil to the heat from the pork, and the sharpness from the vinaigrette absolutely shone. Truly, I don’t think I’ve ever had a dish quite like it – and I’ve already attempted to replicate the pork at home. As we tucked in, we were able to discuss what life and eating is like in New Orleans with Tory and Meg, and it was so inspiring to hear about how they keep an iconic restaurant like the Commander’s Palace at the top of it’s game. Opened in 1880, it’s a landmark for the city and is regularly ranked as New Orleans top spot. It was fascinating to learn about dishes which are a real part of the Louisiana culture, like Turtle Soup and Jambalaya.

All too soon it was time for dessert, and honestly, I’m not sure I’ve ever seen such an exciting preparation of pudding! The iconic Bananas Foster was on the menu, so the entire table headed through to the kitchen to see Meg and Tory at work! 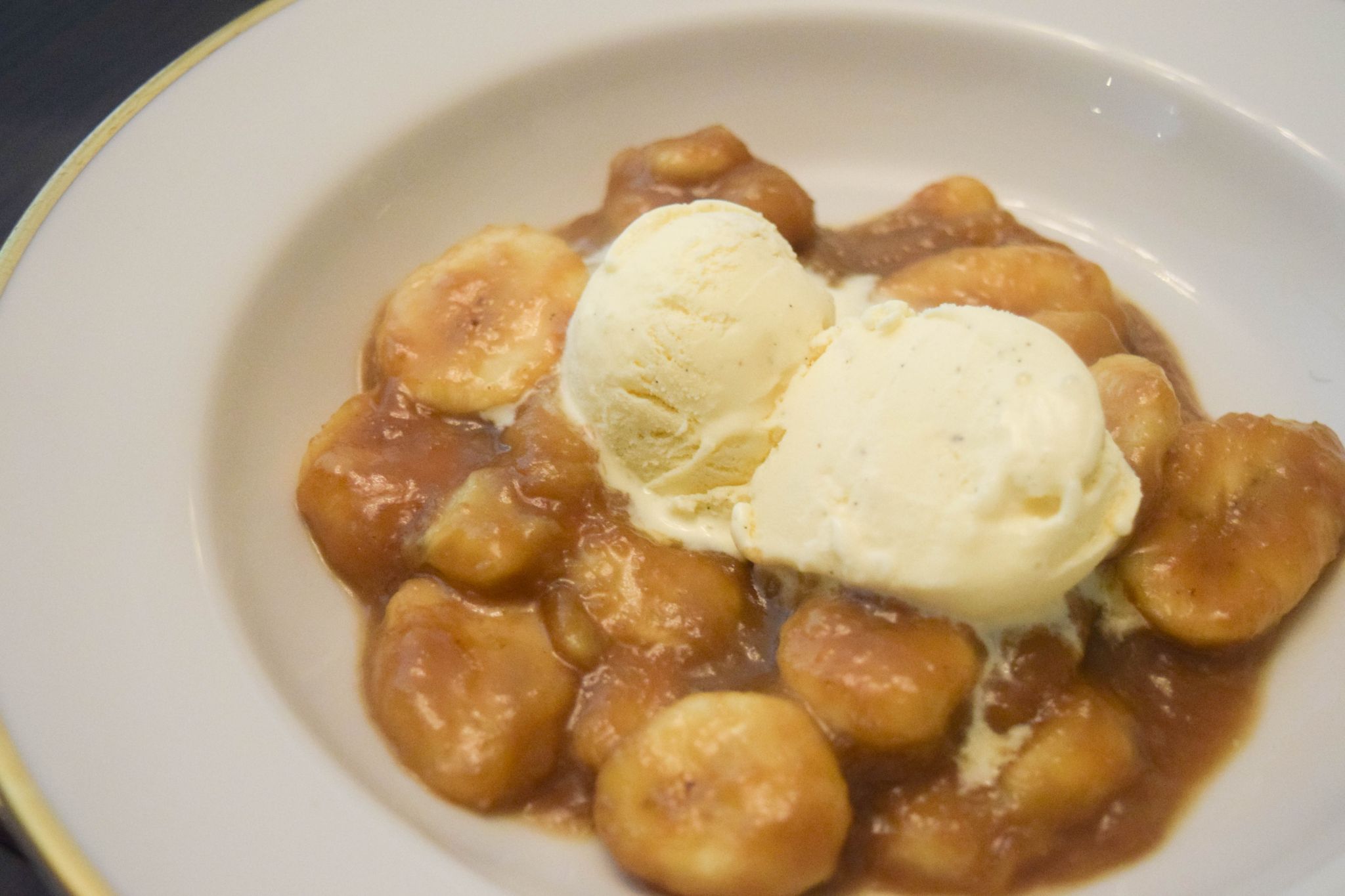 If you’ve never tried the dish (stop everything and try a classic recipe like this one), it’s an absolute riot. Bananas are sautéd in butter and brown sugar, and just when they reach a soft, pudding-y consistency, they’re flambéed with rum then served with a scoop of vanilla ice cream. You can see how it all went down here.

The result is pretty much everything you want from comfort food – soft, sweet and deliciously rich – it really is the ultimate pudding! 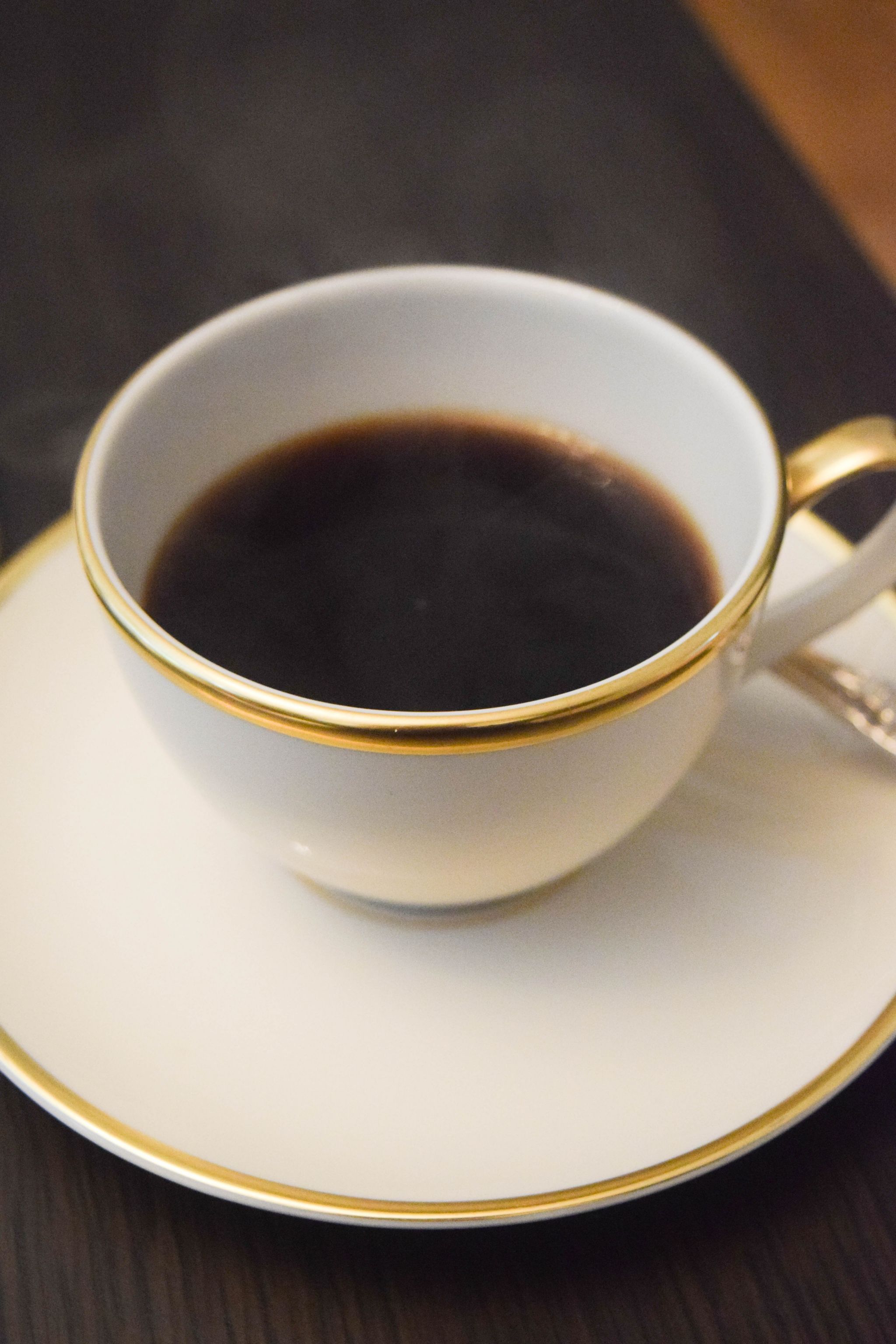 The afternoon finished with strong black coffees brought over from New Orleans – and they were the perfect pick-me-up after such an indulgent few hours. It was such a delight to meet Tory, Meg, Chief Officer Ellen Wong as well as everyone who attended. I don’t think I’m alone in saying that New Orleans is now topping the (rather long) list of holiday spots!

Thank you so much to the US Consulate in Edinburgh, Chief Officer Ellen Wong, Tory McPhail and Meg Bickford for having me, and educating me in all things New Orleans. You can find out more about the Commander’s Palace here