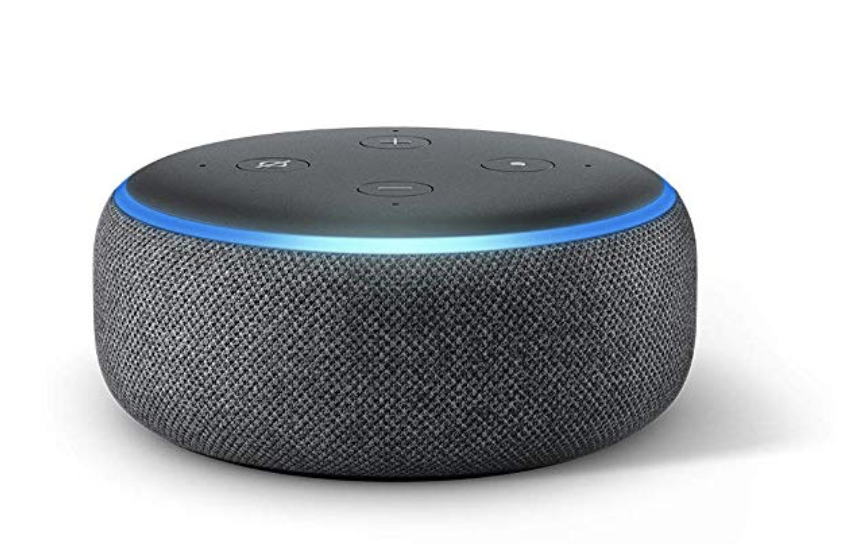 On the 20th April, there will be a whole new way to use your Amazon Alexa – all you’ve got to say is ‘Alexa, entertain me this Easter’ and you’ll be able to partake in a whole host of activities. From trivia to recipes, to how to impersonate a chicken (all vital skills, you’ll agree) if you use 5 or more Alexa skills between April 20th and 21st, you’ll be entered in a competition with the chance to win a £1000 Amazon voucher.

I’m already planning my skills hunt so I’ll be in with a chance! If you don’t have an Alexa-enabled device, order one now with Prime, so you can play along too.

Amazon Alexa Echo Dots start at £29.99 and are available here 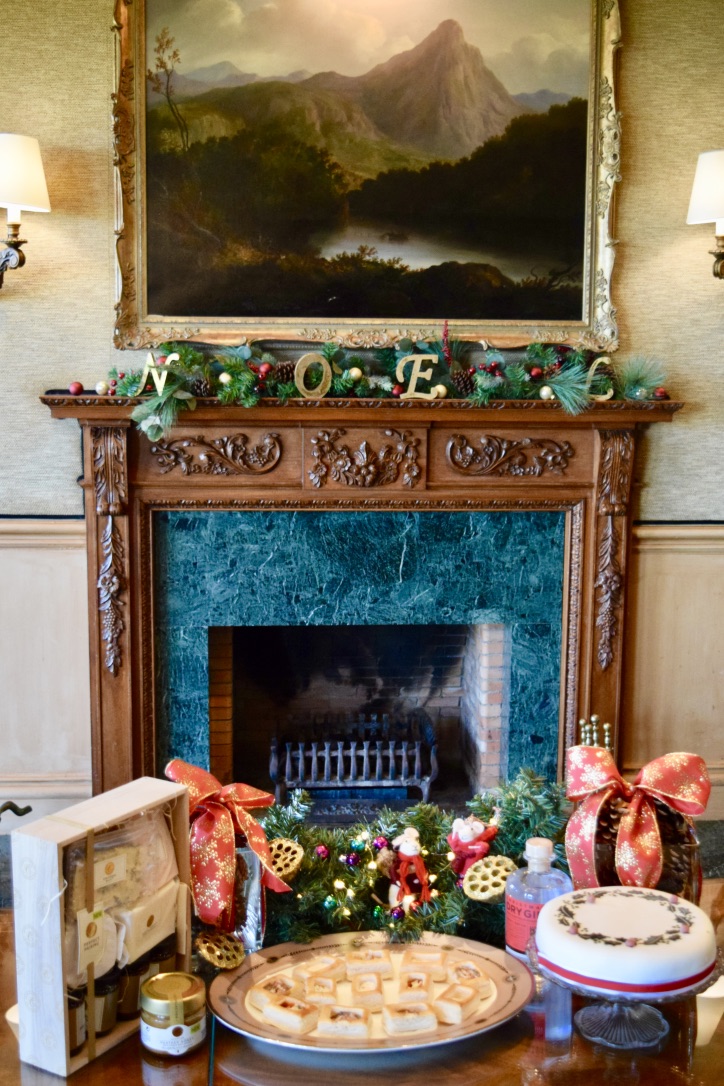 With just over a week to go until Christmas Day, I’m very much loving the festive build up. From evenings out, to entertaining at home, it feels like there is something on nightly. This year has been an incredibly busy one, so I’m savouring every cosy evening, and as usual, M&S has been an absolute lifesaver when it comes to stocking up on seasonal goodies. 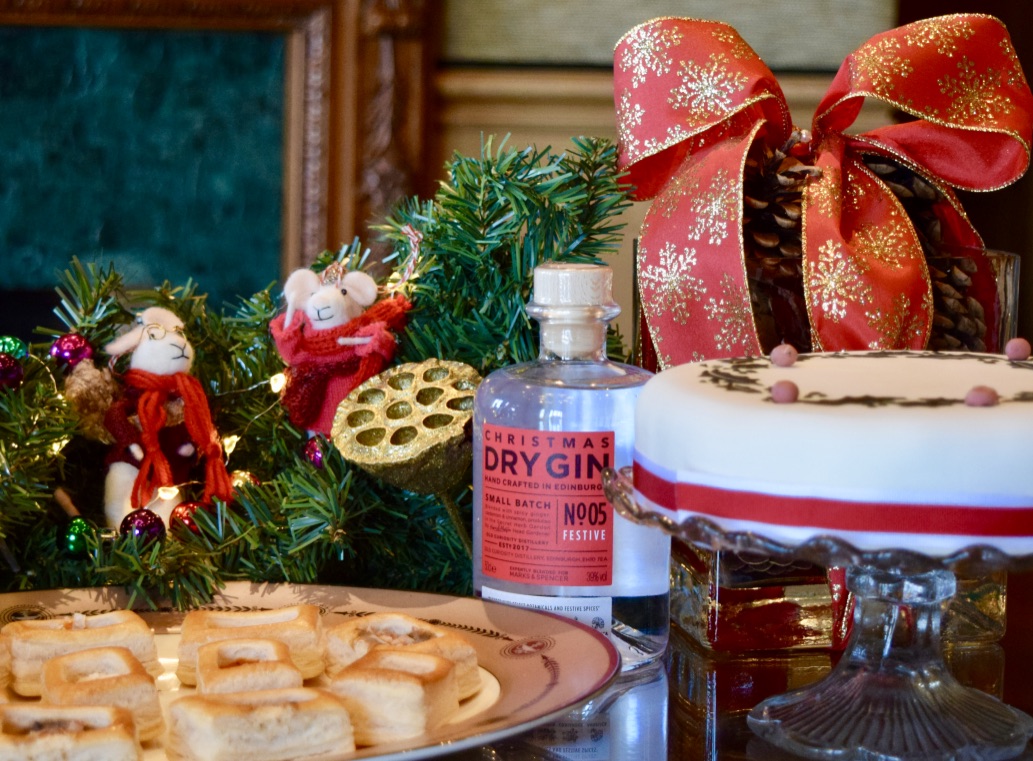 From turkeys to artisanal gins, M&S are a one-stop-shop for getting ready for Christmas, and I love how I can mix and match festive classics, like their incredible Christmas cakes (I chose the traditional fully iced version) with fun new arrivals like Salted Caramel Pine Cones and Shimmering Milk Chocolates.

M&S vol au vents are a bit of a running tradition in my family – there are stories about how my grandmother was never without them, just incase friend dropped by, and who am I to break tradition? My favourites are the Mini Deep Filled vol au vents (£10) – coming in three flavour combinations (bacon and mushroom, salmon and cream cheese & tomato and mozzarella) you can pop these in the oven a few minutes before guests are expected, and they disappear in front of your eyes! 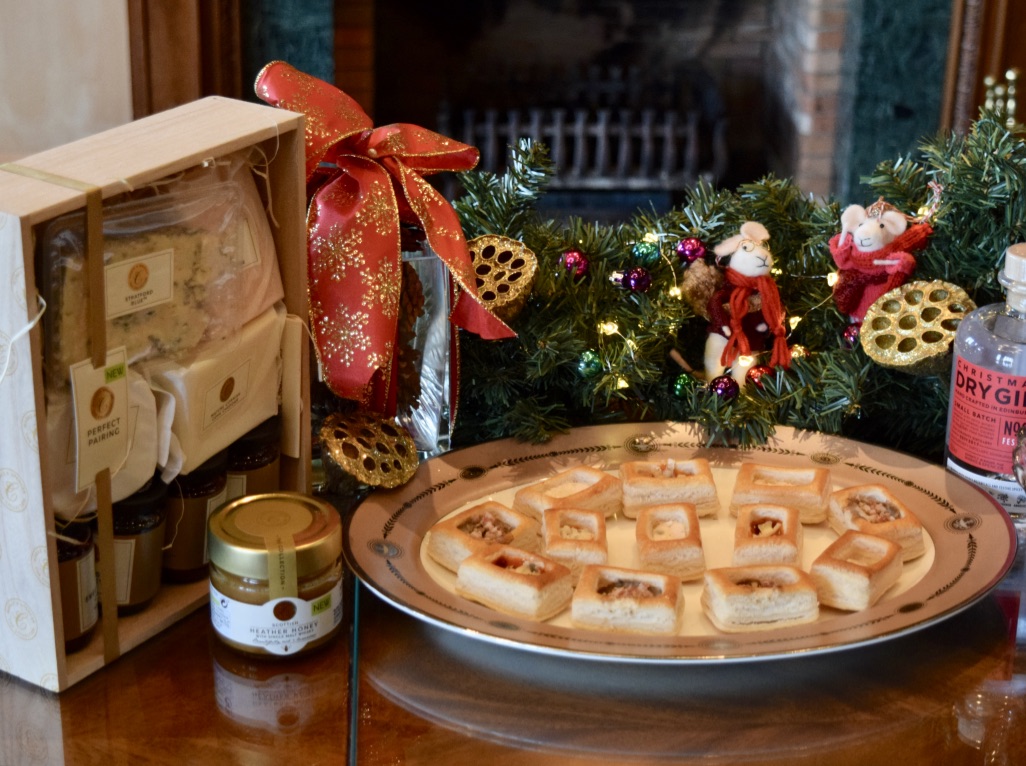 If you’re heading to someone’s house around the Christmas period, one of my favourite things to take is a great cheeseboard, and M&S is absolutely killing it with their selection. Whether you opt for one with board included, or my favourite, the Perfect Pairings collection, it’s guaranteed to go down a storm! The Perfect Pairings box includes a selection of four cheeses with accompanying chutneys and jams. I loved the pairing notes tucked inside, and the combination of flavours are absolutely perfect. 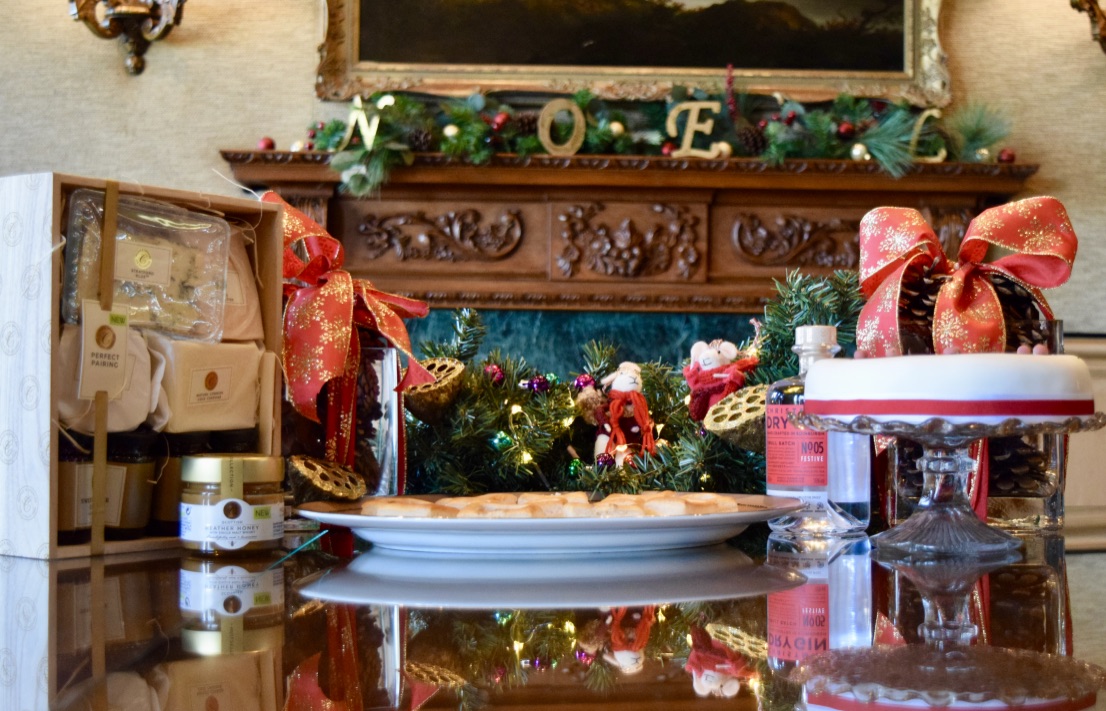 At this point, it feels like M&S is pretty much synonymous with Christmas, and with good reason! From gorgeously scented candles (their Mandarin, Cinnamon and Clove and Mistletoe & Fir scents are divine) to easy gift buying (their beauty sections are an absolute dream) a trip to M&S seriously reduces any festive stress, and once your shopping is finished, you can even reward yourself with a drop of their Christmas Gin – made by Edinburgh’s own Old Curiosity Gin.

This post is sponsored by M&S but all opinions are my own. Thank you so much to M&S for working with me. 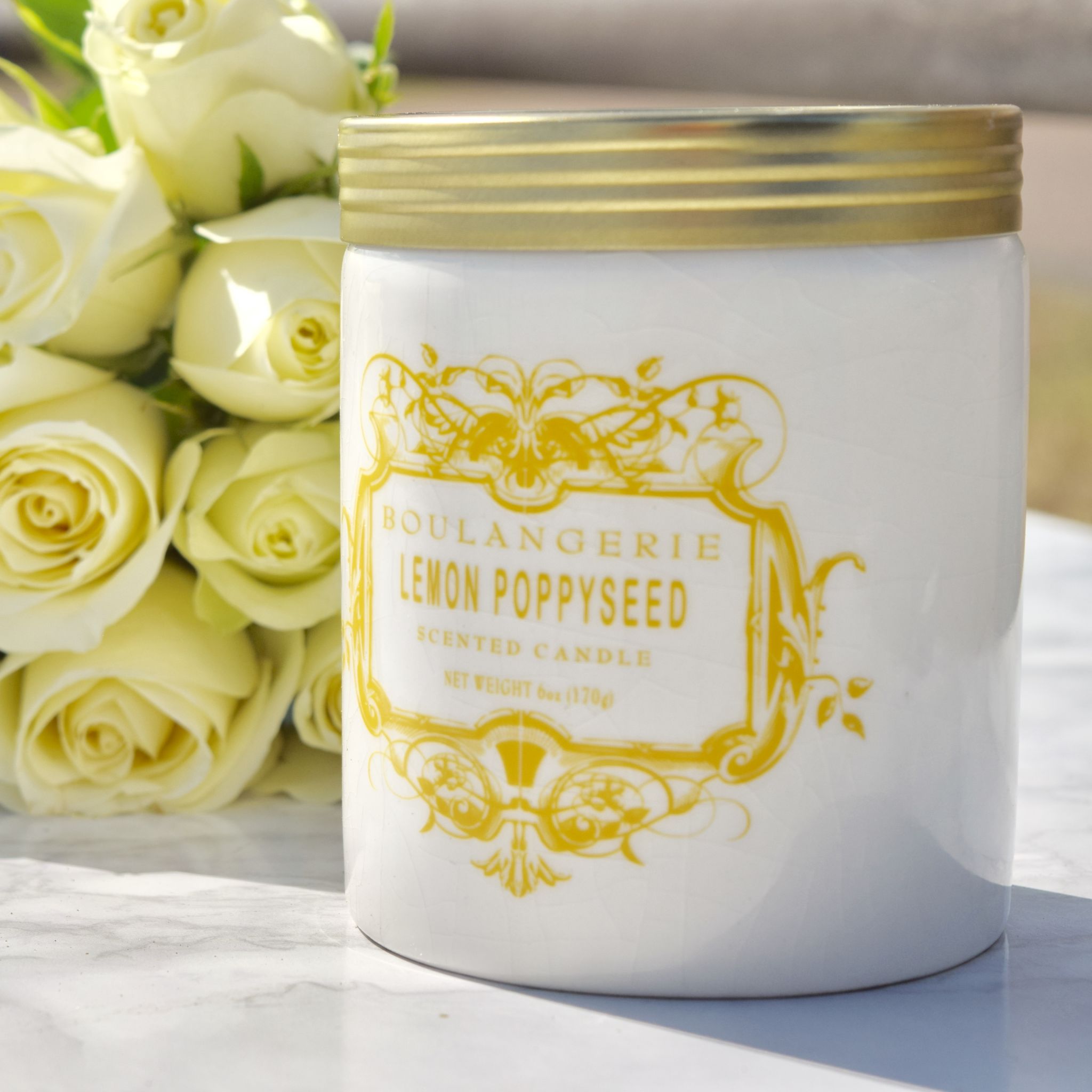 Over the past few days, it feels like Scotland has gone screeching into autumn and winter. Gone are balmy evenings and golden sunshine, instead they’ve been replaced with lashing wind and rain. It’s a bit grim, so I’ve been trying to make the house feel as calm and as cosy as possible. Since I’m lucky enough to work from home, I’ve been burning Illume’s Boulangerie Lemon Poppyseed Candle in the office each day as I get down to work. 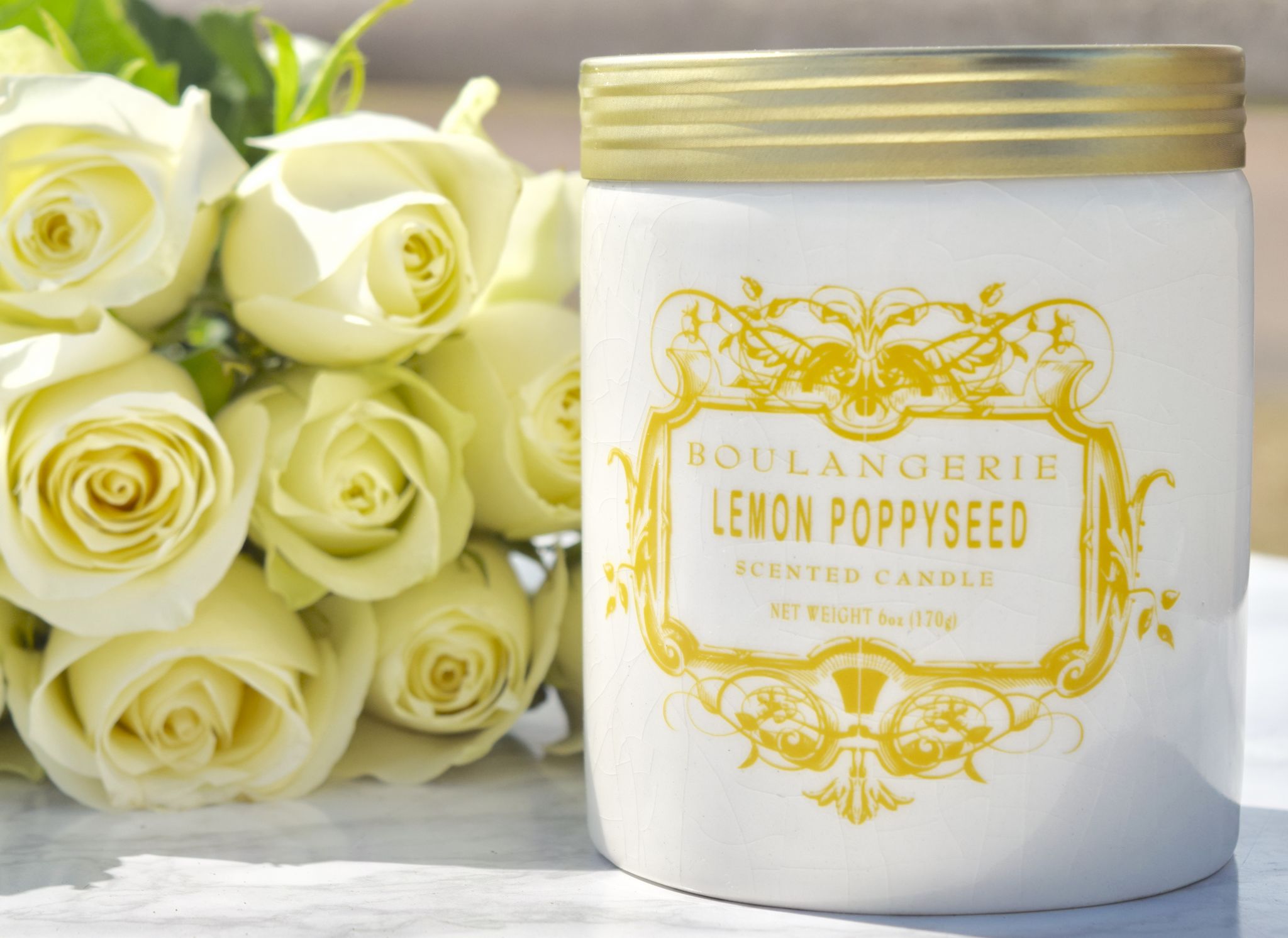 Packaged in the brand’s signature china pots, these are candles which smell as good as they look. Inspired by the fabulous bakeries of France, the Boulangerie range make some of the most deliciously edible scents you can imagine. Lemon Poppyseed is perfect if you’re after a soft, warming scent to see you through the autumn. Like all Illume candles, it’s made with soy wax and natural fragrance – so there is no smut or soot when burning, and the room smells incredible for hours afterwards. I’ve already got my eye on a few other scents (pumpkin shuffle or Espresso if you’re wondering) which should see me through the seasons!

Illume Boulangerie Candles are priced at £18 and are available here 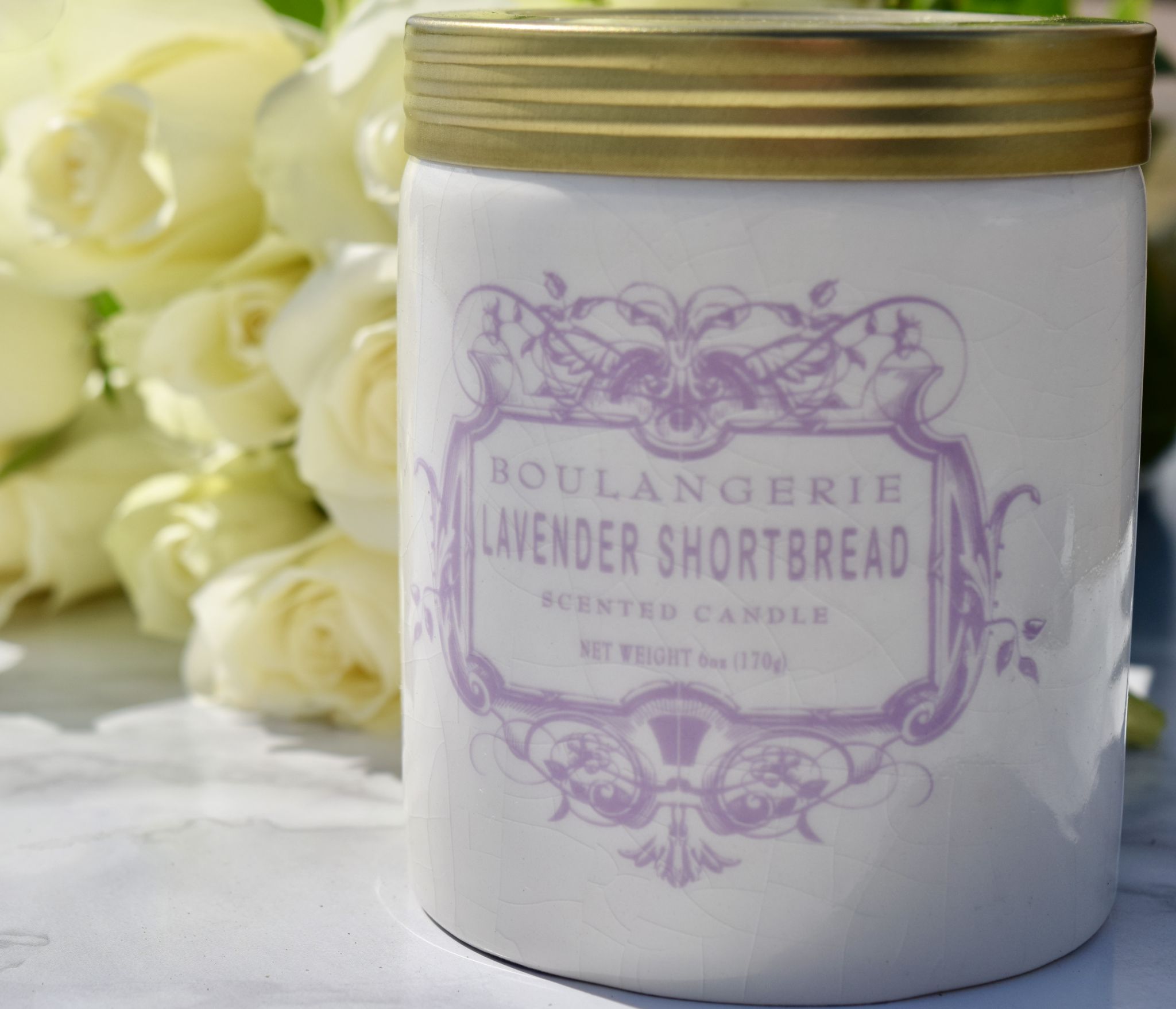 When it comes to working from home, there are a whole lot of advantages. Blog appointment at noon on a Tuesday? I’m there. My commute consists of walking to the study, and I can work at times which suit me. But perhaps the biggest luxury of them all is the fact that I get to work how I want. I get to choose my computer, my desk, my hours etc, and the effect is that I get to be way more effective. One of these little luxury, is also getting to burn candles as I work away. More often than not, these are fresh citrus or white flower scented, but recently, I’ve fallen in love with Illume’s Boulangerie Candle Jars. 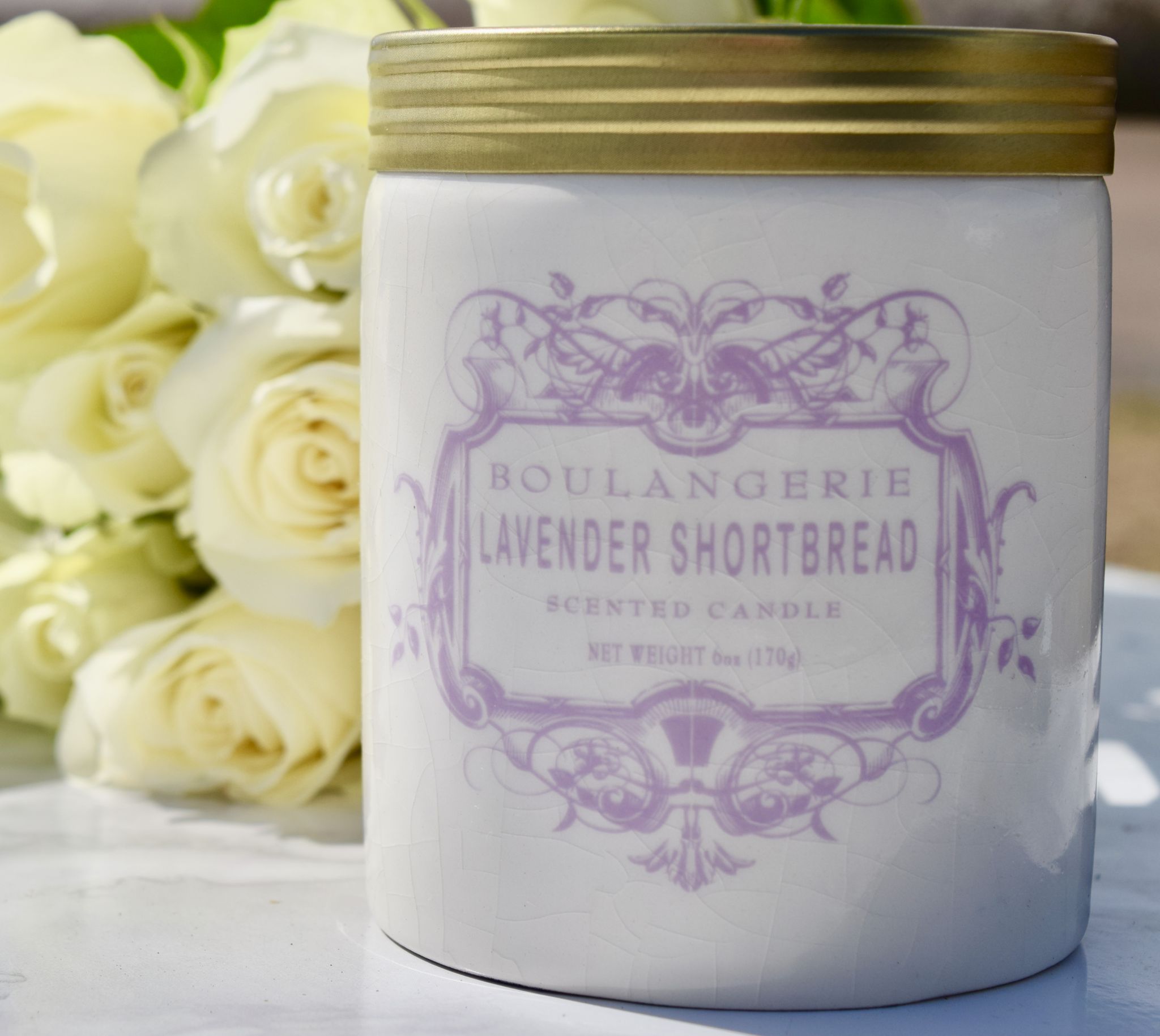 Packaged in the most gorgeous little clay pots, these candles look as wonderful as they smell. I just adore the delicate illustrations on the front – they look gorgeous on my desk – which is a good thing, because each candle burns for hours on end. Made of food-grade ingredients like coconut wax and essential oils, the candles burn completely cleanly. There is no soot or smut, instead, it just scents the whole house with the most glorious scents. Lavender Shortbread is my first, and it’s a wonderfully warm, slightly sweet scent, perfect for brightening up dull days. I’ve got my eye on the full line-up, with scents like Espresso and Sweet Vanilla Cinnamon, you can’t blame me!

Illume Boulangerie Candles are priced at £16 and are available here 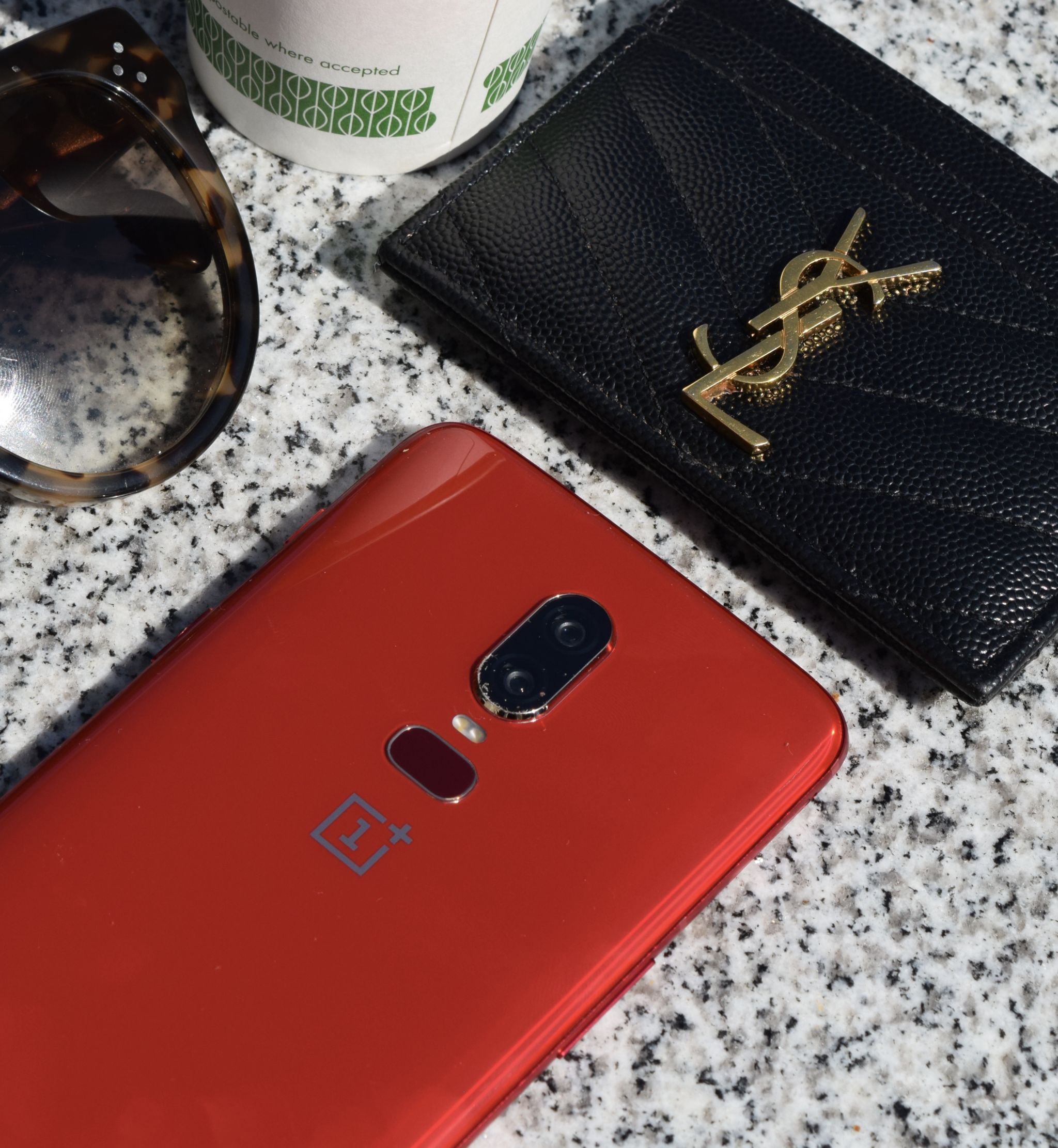 When it comes to technology, I can be a bit of a nightmare. I’m really particular about the  way I like things to perform, to look and even to feel when I’m using them. As a result of this, I waver over every purchase in case something just doesn’t feel right. So, when OnePlus got in touch to see if I’d like to give their OnePlus 6 phone a spin, complete in the racy red edition, I was thrilled. 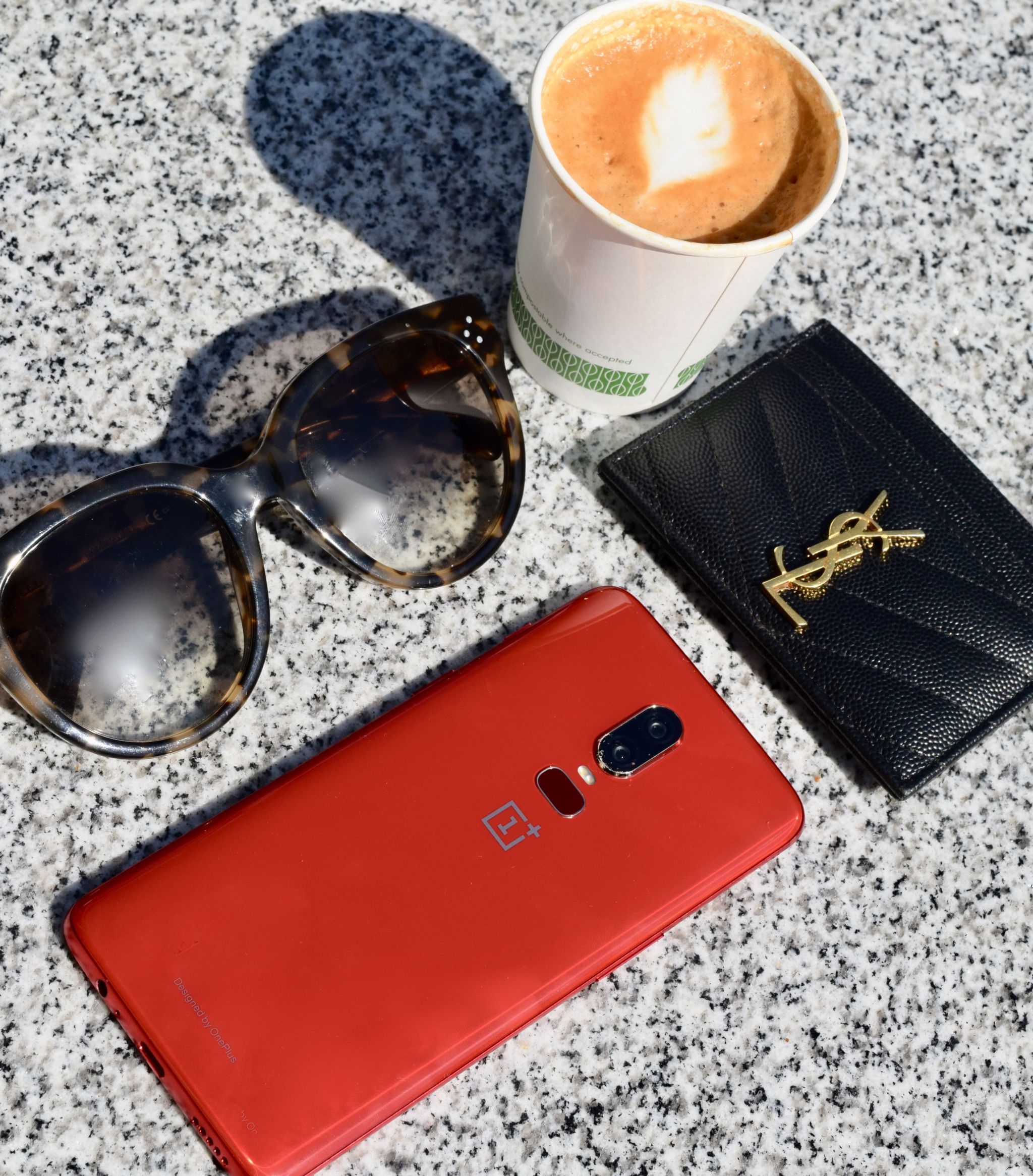 Taking the OnePlus 6 out the box, I was stunned at how good the phone looks. A similar size to the iPhone 8 Plus, but a little thinner, this phone practically glows thanks to the six panels of glass which make up the back of the OnePlus 6 Red. With this colour, they have also added an additional anti-reflective layer to create a sense of depth by allowing more light to reach the bottom layers before being reflected off the device. The result is a phone which shimmers and shines in light, and looks as good as it feels to use. 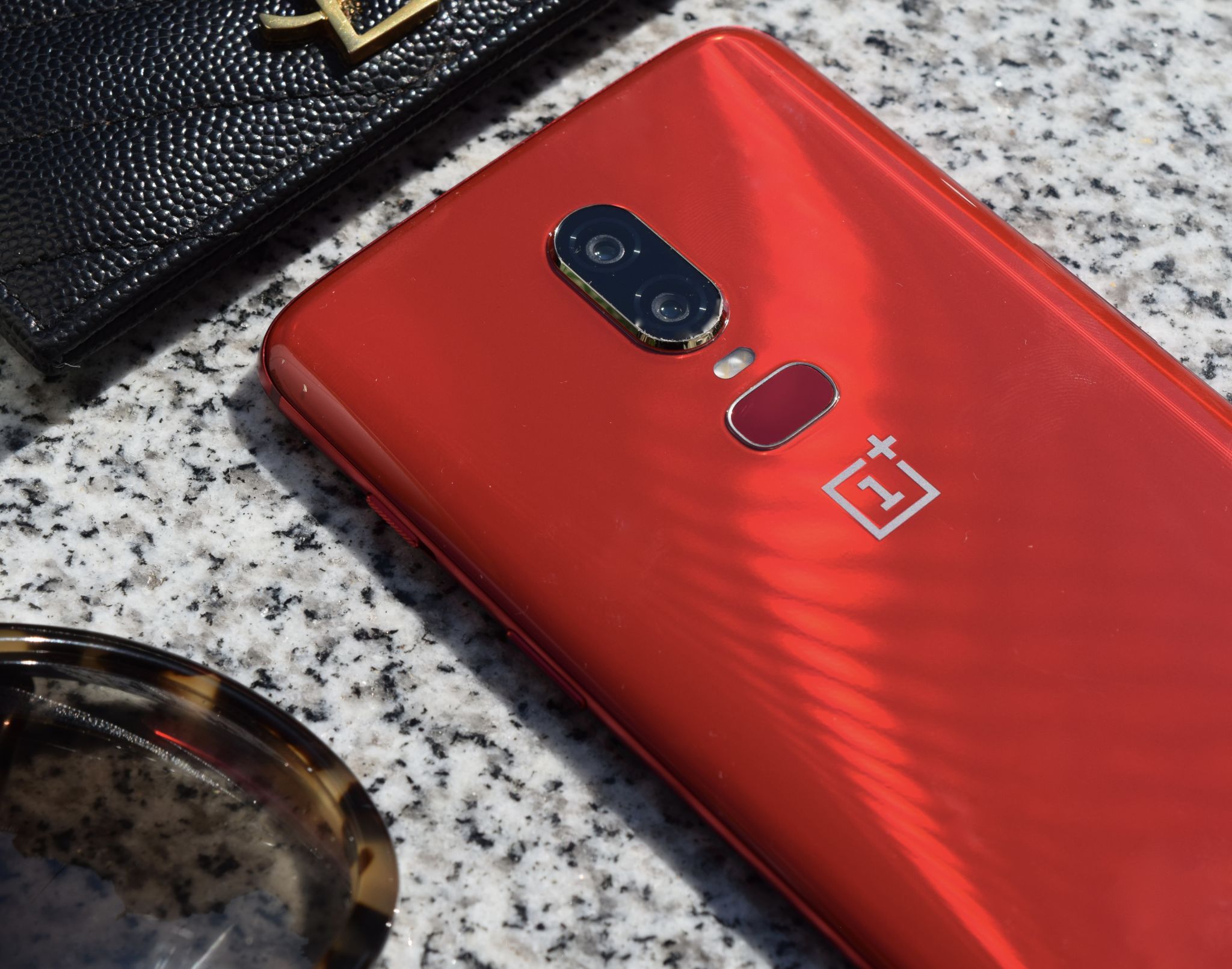 As an absolute android newby, I had been a little worried about how I’d find using the phone, but it couldn’t be simpler. Thanks to the glass front and back, the phone is largely spill proof , and it even charges fully within half an hour. The phone itself is all screen at the front, and the back has a handy fingerprint sensor as well as a vertically aligned dual-lens camera. Thanks to the newly available ‘Portrait Mode’ the camera can add DSLR-style depth of field – perfect for snapping away all those Instagram pictures! The camera also can record for longer periods than most phones, so if you’re a big stories user – or you’re wanting to dabble in InstagramTV, this is the phone for you! 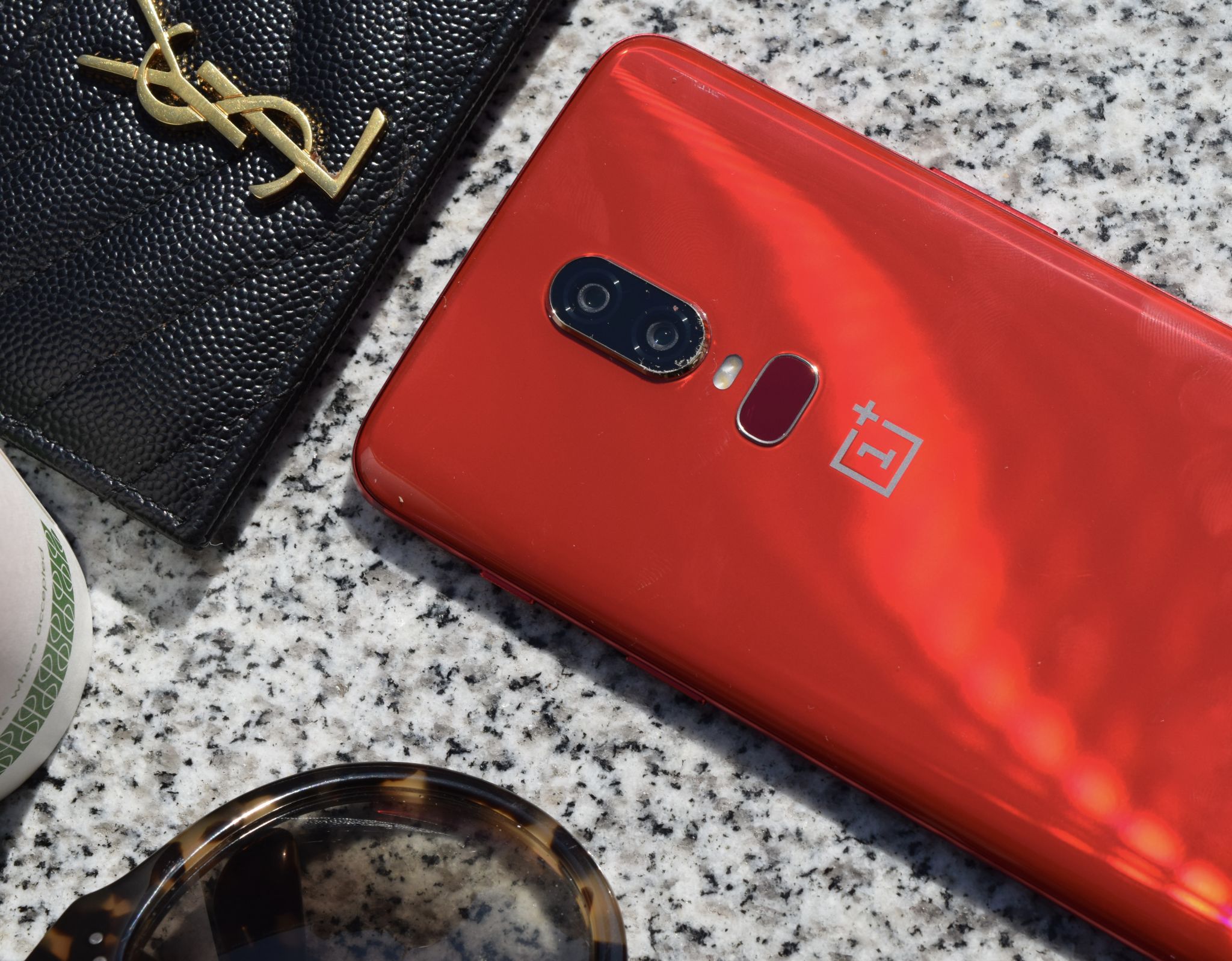 The OnePlus 6 is also gloriously fast to use – there is no waiting around while programmes load up. Instead a quick tap and everything is raring to go. Adding apps from the Google store is absolutely painless, and I’ve loaded up everything from Spotify to Facebook, so they’re all available at a single touch. Since the phone is an android, it’s also perfect if, like me, you’re a gmail fiend. My work email is a Gmail account, so it syncs in seamlessly with the OnePlus 6 calendar system, meaning I never forget about a meeting or phone call, and don’t have to add events in multiple systems. 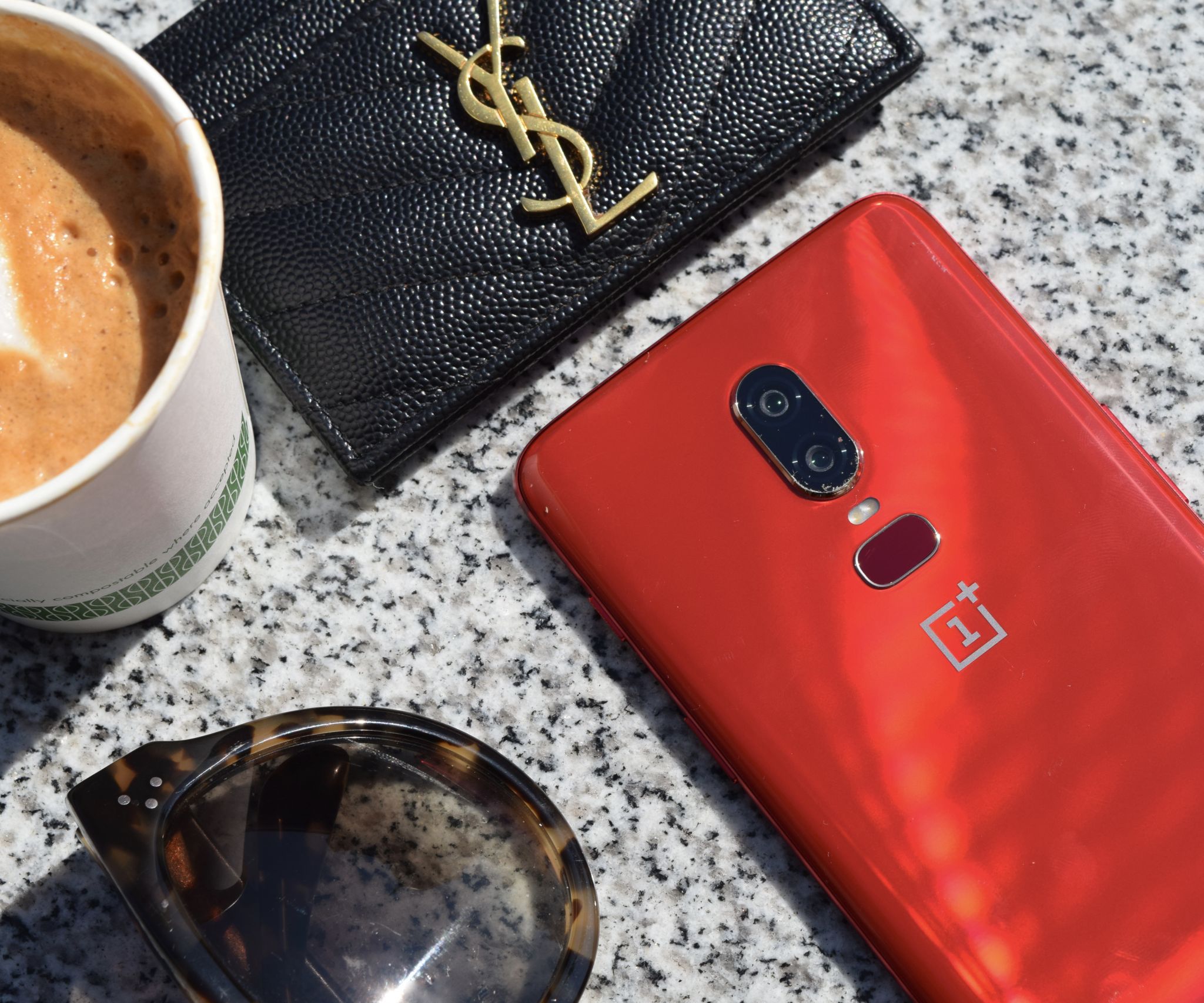 What’s impressed me most about the OnePlus 6 though, is all the extra little details not found on other devices. First off there is a headphone port (cue angels singing) which means my time buying multiple other phones is well and truly over. Not only this, but the facial recognition allows you to to unlock the phone simple glance at the screen. There’s also a reading mode which gives the screen a Kindle-style appearance (perfect for taking to the beach) as well as gaming mode which brings a notification-free and faster experience. You can also remove the virtual home and back buttons at the bottom of the screen – which can then be replaced by gestures.

The phone is an absolute powerhouse of a device, and it’s perfect to use both for work, and for personal use. It’s also incredibly affordable – the phone starts at £559 and is available here.